Legislators from Northern Uganda Say Government is Behind Land Conflicts 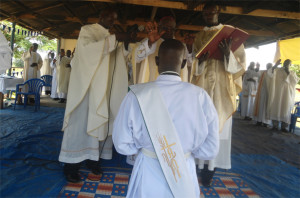 Legislators from the Acholi and Lango sub regions have condemned the Ugandan government of inciting and fuelling land conflict in the regions as part of a long term strategy to grab land for investment, citing the most recent clashes in Otuke district and Apaa and Lakang in Amuru districts in northern Uganda.

They made the statements last weekend during the ordination of Rev. Father Orach Ssemwanga in Awach Sub County and said that the government is behind escalating land conflict in the region.

Hon. Ronald Reagan Okumu, the Member of Parliament for Aswa County in Gulu district, called the community to guard their land jealously or else become landless slaves employed to work on what used to be their land.

Okumu’s outburst follows a constitutional court ruling made against LCII chairmen that they have no mandate to handle land cases that should be left to the courts.

Concerns citizen had earlier challenged the legitimacy of the LC courts, which they said has been the source of most of the land conflicts in the region because of its complete ignorance of the traditional arrangement in place.

The Women Member of Parliament for Gulu, Hon. Betty Aol Ocan, said that the government has always undermined Acholi customary land law since it has an ulterior motive to cause chaos in the region.

Aol Ocan argued that the Acholi people should not object to the notion of investors, when an investor approaches, they should instead negotiate directly with land owners, unlike in Amuru where Madhvani had to go through the state house and court.

“The Uganda government is taking this opportunity; our people are so poor that if we did not protect them, government will take their land.  We should protect women and children who are the most vulnerable,” Aol Ocan said.

The MP for Oyam district, Hon. Betty Amongi, said that the government was using underhand methods to grab land in the region: “Why incite people to clash among themselves?” Amongi asked.

She added that before 1986 there were no land conflicts in Lango and Acholi sub regions and the customary traditional norms were functioning very well.

Hon Alum Ogwang, who is the Women MP for Oyam, advised all investors who want to invest in northern Uganda to talk to the community and share their investments with them because without land, there can be no investment.

“For us any body who wants to have our land must come and negotiate with us on our own terms, not the investor’s terms,” Ogwang said.

Meanwhile, the Catholic Archbishop for Gulu, John Baptist Odama, called on the government not to force the people to give their land to investors without their willingness.

“Land is our mother where we all get milk, food and other benefits. God gave the Acholi people the land which they must enjoy for productivity. If somebody from outside Acholi region wants land, they should sit down with the stakeholders and agree on the terms,” Odama said.

“Land has divided the people of Acholi region where killings have become rampant. We don’t have our voice to solve the issue. We are all the babies of this land where we all eat from,” Odama added.

He called on all the traditional, political, and religious leaders to unite and help people to resolve the land issues amicably without violence in the communities.

“Where will they go if the peoples land is sold without their consent?” Odama asked.  He also added, “Don’t force the people off their land, dialogue does not kill.”

Odama said the people of the Acholi region have suffered enough during the brutal two decades of war and appealed to all stakeholders to allow the people to utilize the land for production in order to improve their living standards and raise household incomes.

The archbishop warned the Christians from blocking the transfer of priests who are doing great development work in their parishes.

“When a priest does good work in a parish, the Christians don’t want them to be transferred but when they make mistakes, they call for their transfers,” Odama noted.

He said God wants everybody to live peacefully and in harmony in order to champion development in the world.