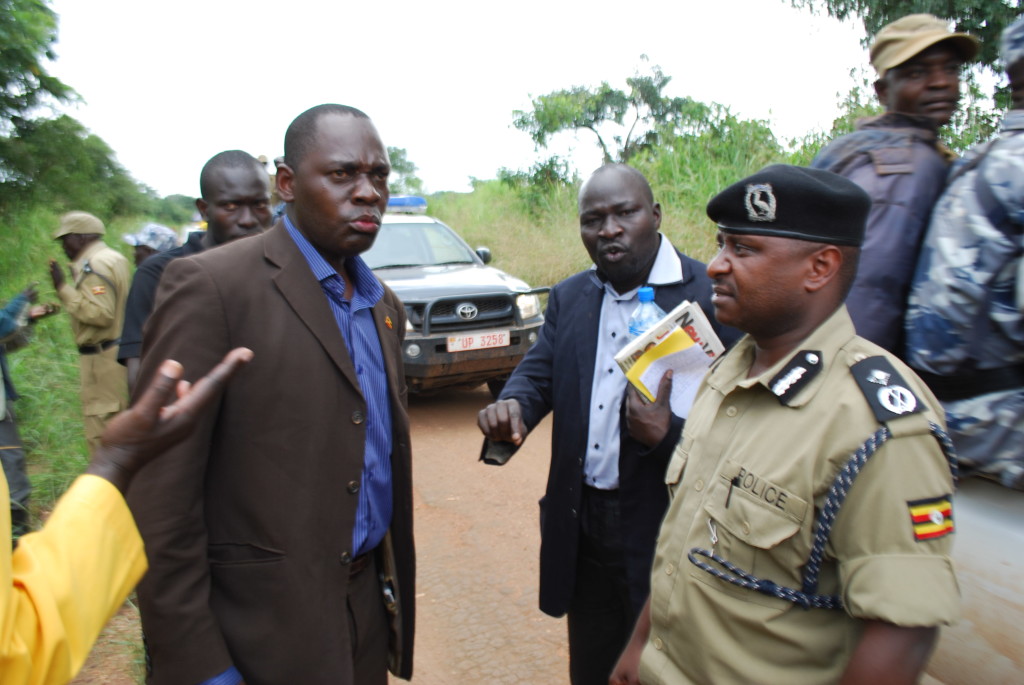 Drama ensued on Monday in Apaa village in Amuru district when government surveyors started to demarcate the land belonging to the communities with the intention to give it to Adjumani district.

The jittered residents who were held up in a meeting in the trading centre with police officials and the Resident District Commisioner (RDC) Captain Mwesigye James, stopped the meeting abruptly when they were told that survey work was already underway.

Earlier on, the residents were told that the survey would not begin until they were assured of the reason and the exact position of the demarcation. But this proved to be contrast to what was happening and so violence ensued.

The men abandoned their wives behind in the trading centre and dashed towards the area where the survey work was going on by the officials from the Ministry of Land, Housing and Urban Development.

A visibly charged area Member of Parliament Hon Gilbert Olanya drove himself to the scene; he started descending on the policemen who had been heavily deployed to protect the surveyors.

Olanya accused the police of being agents of land grabbers in the country as Amuru DPC Jacinto Oburu tried to calm him down.

“Police have become agents of land grabbers in the country.  We shall die here today,” he said.  “This is very bogus, pick up your things and leave here within five seconds,” he added.

Olanya told the government surveyors that the land in question belonged to the Acholi community in Amuru and that Zuka River, was the colonial border point with Adjumani, over 15 miles away from scene of their survey site.

At the scene called Wi-Lacuk, some rowdy residents attacked the surveyors and removed away the “forged” maps and tools from them.

This forced the surveyors both from central government and Adjumani to take refuge in their cars.

Meanwhile, the police opened live ammunition and teargas to disperse angry residents who had taken one vehicle hostage. Several people were injured in the melee as they took cover in the surrounding bushes.

Later several road blocks were mounted to prevent police and the surveyors to drive their way back to the trading centre. 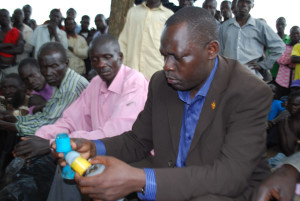 After their victory, they sang traditional songs that called on the protection of land from leaders during surge of the NRA into Acholiland in 1986: “Okello I weko ngom ki anga…bedo awobe tek, iweko ngom ki anga? Wii-yeee!” literary meaning to whom will you abandon this land.

In February this year, a joint security force comprising UPDF, Police and Uganda Wildlife Authority (UWA) evicted over 6000 residents from the same land. They were dumped at Pabbo sub-county headquarters and left to fend for themselves.

In the process, two people were shot dead and nine people are still unaccounted; 25 were remanded on charges related to what the Uganda government called ‘obstruction of justice and going armed in public.’

UWA claims that the land in question belongs to East Madi game reserve which has already been leased to Martin Bruce of the Lake Albert Safaris for hunting as a form of sport, way back in 2005.

But the residents insist the land is customary and they are ready to sacrifice their live in defense of it.

“It’s very sad and painful. When an armed visitor comes to your home, what do you do?” Mr Quinto Opok 79 said “I have assured you, young men whom we nurtured. Let us fight and fight them.”

The Sub-county LC3 Mr Christopher Ojera, Speaker of Amuru district Mr Christopher Odongkara and Michael Lakony who was alleged to have received money from the Surveyors to mobilize the communities turned against the officials calling them invaders.

“You cannot fool us on our land, fool others not Acholi,” Odongkara, formerly charged with inciting violence in the same communities; said while shedding tears.

A very angry sounding Ojera said that: “This is a Moses Ali project of land grabbing, if government think the rule can only go with Ali, so be it. Some of us are spent force,” he added.

The residents have called on the United Nation, Human Rights Watch and friendlier countries to intervene on the land conflict to deter bloodshed.

By mid-morning on August 20th, some energetic looking youth wielded bows and arrows and machetes as they waited for the police and surveyors.

They called upon all peace lovers and sympathisers to get involved in persuading government to avert a looming bloodshed which is otherwise going to be unavoided.

This incident is occurring barely two years after some communities only returned to their original homes from close to 3 decades of internment in squalid camp settlements.

President Yoweri Museveni on April 20th while commemorating the Atiak Massacre in Atyak sub-county told the residents that they must leave the area to the tourism ministry.

To some elders, it doesn’t therefore come as a surprise that now the Land, Housing and Urban Development Ministry has dispatched a team of surveyors to Amuru to carry out the exercise of surveying it and demarcation; come what may.

The Senior Survey Officer who led the team, some whom are stationed in Adjumani Mr Justus Kakooza, said that he was acting under directives from the infrastructural committee of parliament.

The line Parliamentary committee was supposed to come out with its report on the demarcation of the border before any survey took place.

“Most of the district borders are not demarcated and the ministry is working on a fire brigade approach on this,” Kakooza said.

He said that his coming to Amuru was a request from the two disputed districts to ascertain the border points.  But the officials said that no request was sent from Amuru, if it were then they need to know which officials in Amuru had given the go ahead for the exercise.

“The demarcation will continue if the ministry gives me further go-ahead, but the communities need proper guidance,” he said.

On Friday the President of the Uganda people’s Congress Party Dr Olara Otunnu toured Lakang and Kololo, neighbouring villages to Apaa and urged residents there to fight to the end in protecting their land.  Otunnu promised the residents that under no circumstance will their land be grabbed.