Kitgum And Pader Grappling With Scarcity Of Nodding Syndrome Drugs 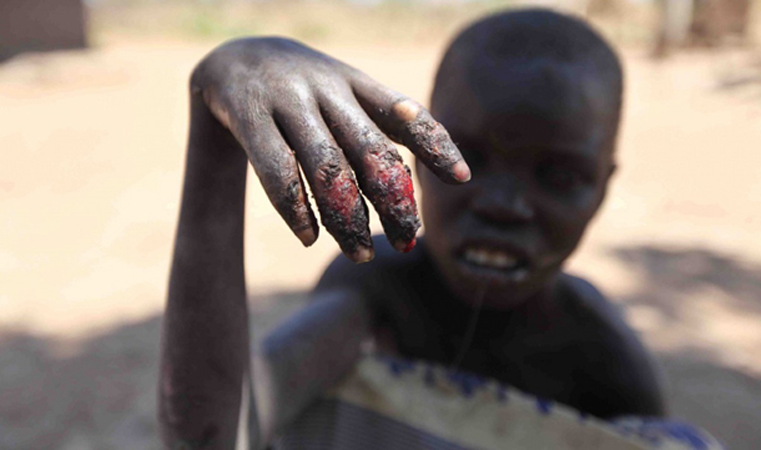 Children suffering from the nodding syndrome

Children suffering from the nodding syndrome in Kitgum and Pader districts have been hit by drug shortage for controlling the disease, resulting in the death of one child.

Aber Betty, 17, a resident of Tumangu village, Lamit Parish in Akwang Sub County died as a direct result of lack of drugs to control recurrent seizures.

The chairperson of the Tumangu village Health Teams, Mr. Otto Joe, said that the village ran out of drugs four weeks ago.

Aber’s body was laid to rest in her home village after a team of health workers from the Ministry of Health conducted postmortem to ascertain the cause of death and collect samples for further investigations.

Otto says Aber is the 15th child that Akwang Sub County has lost to the dreaded disease; out of which 11 died from Tumangu alone.  He says the situations of nodding syndrome has been heavily politicized that the exact numbers of the dead is deliberately being concealed from the public.

But Luka Nyeko, the chairperson of District Nodding Syndrome Taskforce, rubbished the claim and says that only 11 children have died in the entire district since the disease was reported in Kitgum in 2011. He says the battle against the syndrome has largely been won because of the swift response taken by the NRM government.

Nyeko further noted that four of the children died from hospitals where they were receiving treatment while another 7 died from their homes.

Nyeko says another 4 were raped, and maintains that the Ministry of Health continues to supply enough drugs to all nodding syndrome treatment centres in Acholi sub region. He says that even food has been delivered in plenty over the Christmas holidays, so opposition are the people trying to politicize the nodding syndrome.

In Pader district, the drug shortage was also brought to the notice of researchers from the Makerere University School of Public Health, Butabika Hospital and Gulu University, who visited the district recently.

The visit was aimed at determining the effectiveness of group interpersonal therapy for caregivers of children with the nodding syndrome to improve mental health of both the patients and the caregivers.

A member of the village health team of Awilongoi in Atanga sub county, Mr. Bosco Ochakachon, told the team that parents and guardians were so depressed that some are being driven to suicide due to the problem.

Ochakachon said the drugs shortage is a big problem even to the village health teams, yet they are expected to monitor and deliver drugs to the patients.

“Nowadays, children take three to four days without getting drugs. We have two children who were taking drugs and they were able to go to school, but right now, one fell down and got serious injury that is likely to cause him a permanent disability and deformity,” he explained.

“I request that the drugs be brought in time and in plenty, so that these children can be treated to prevent depression to their caregivers,” Ochakachon said.

Jennifer Atim said: “God gave me only one child and she is affected. My hope was in the drugs she had been taking, but now she has had a serious relapse as she fell in fire and got burnt.”

Prof. Ssegane Musisi, a senior psychiatric consultant, who led the research team, said many children with the nodding syndrome have seizures and epilepsy.

If not treated, he said, they are likely to have more brain damage, social isolation and may not go to school.

He suggested that drugs like anti-epileptics, anti-depressants and any other treatment of any infection including immunisation which they missed in addition to proper nutrition, can help them grow and become productive in society.

Dan Kimosho, the National Medical Stores spokesperson, however, said leaders of the affected districts have not requested for the drugs. “

Our deliveries always depend on a requisition and for anyone who has not requested for the drugs we cannot deliver,” he said.

Kimosho advised the leaders of the affected areas to put in their orders for quick delivery of the drugs.

At least 5,000 children are suffering from Nodding Syndrome in Kitgum district, mainly in Tumangu, Kitgum Matidi and Okidi Villages.