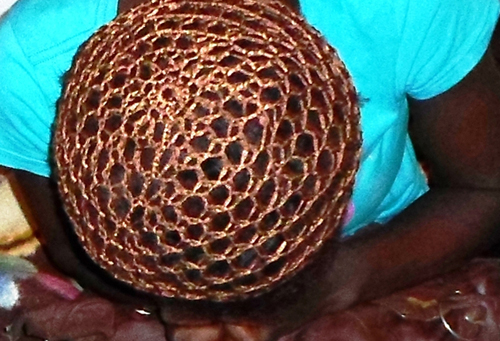 Anek Hides from the camera

One of the longest working prostitutes in Gulu town, Pamela Anek (Not real names), has declared that she is officially retired.  She says that she has been in the “business” for 23 years and has “serviced” over 200 customers.

“I now want to raise my daughter because I do not want her to also end up being a prostitute,” Anek said.

Anek 39, begun prostitution at the age of 16 in Gulu town when she left her family home in Atiak village, having fled following the attack on the village that resulted in the Atiak massacre.

“It was in 1991, when I left Atiak sub County in Amuru district and came to Gulu town because most of my village-mates were murdered in the LRA raid that was allegedly commanded by Vincent Otti, which is now commonly referred to as the Atiak Massacre,” she said.

“The Atiak massacre left over 300 residents’ dead and it caused so much pain and fright that I had to leave the area,” she added.

The incident occurred on 20 April 1991 when alleged rebel fighters of the Lord’s Resistance Army overpowered ill-equipped local defence units in a raid on Atiak trading centre. Out of those who were herded by the invading fighters, only five people survived and continue to nurse the scars and wounds to this day.

Many residents moved to Gulu town to seek refuge and Anek was one of them.

When in Gulu town, Anek says that she did not have any relatives because many of them had scattered to different parts of Northern Uganda.

She started working in ‘Lim welo’ restaurant and then later at ‘Opit Travelers Inn’ from where she was attracted into the trade.

“When I came to Gulu town, my main aim was to get a job and may be settle down with a man but I became confused. Men started taking me to lodges and they would give me money,” said Anek.

Because Anek did not have any relatives in Gulu town, she decided to rent a hut in Tegwana, a suburb of Gulu town along Kampala highway.

Anek explained, “One day, a Muganda man picked me from the streets and took me into a lodge where I spent 3 days with him and he paid me some good money which kept me going for days, I thought that that was a good start.”

“After 12 years in the business, a South Sudanese man picked interest in me and we decided to settle down together, and we were even planning marriage,” Anek explained.

But luck wasn’t on her side, the South Sudanese businessman whom Anek identified as ‘Simon Deng’ was robbed along the Nimule-Juba road and killed.

To make it worse, Anek was left 6 months pregnant by Deng. At that time she had already made up her mind to quit prostitution and begin a new life with her man.

“I had not told him that I was a prostitute. I did not want him to even know because I knew I would quit as soon as we were settled,” narrates Anek.

This tragedy meant that Anek still carried on with prostitution after she gave birth to her daughter, who is now 11 years old.

Anek also thinks that if she had quit “serving her customers” she could not have been able to look after her daughter for the last 11 years.

Anek says that at the beginning, she met a lot of challenges and that her work came with numerous risks.

“The daily harassment from some of the police officers was too much. Most of them demand for sex after they arrested me. I had to give in to avoid going to jail. Some of the clients also refuse to pay us after using us for a night,” Anek says.

“To avoid unpaying customers, I began demanding for payment upfront before giving them a service,” she added.

The saddest moment for Anek was when she found out that she was HIV positive and she did not know who infected her with the virus.

“I do not know who infected me with the HIV virus, and as far as I know, I did not have live sex (unprotected) with any of my clients,” said Anek.

Anek thinks that out of her over 200 clients, one of them probably removed a condom and had a live sex with her without her knowing.

“It was in 2010 when I went to Gulu Hospital and I was found to be HIV positive. I did not take it seriously and underwent another test at St. Mary’s Hospital Lacor and it was again found that I was HIV positive,” Anek explains.

“Living a HIV positive life has been tough and after counselling, I continued to work, offering services to 10 men per day.  Out of the 10 men, some of them are top Gulu district political leaders, but I will not name them,” she said.

Anek said that she always demands for protected sex from her clients, but finds that the men always want live sex despite her telling them that she was HIV positive.

“I did not want to infect anybody but many of them (men) demanded for live sex and I did not have any choice since I also wanted some money,” Anek added.

“At least 5 men demanded for live sex everyday, they were not bothered at all about my HIV status,” Anek revealed.

Anek thinks that in the 23 years she has been a “working girl”, she may have infected over 115 men with the virus.  She receives her antiviral treatment from Gulu TASO.

Anek says that she has never regretted prostituting for all these years, because a choice and the men that approached her also did so out of choice.

“I loved the business. I now have a house which I bought by myself from my job. I have also saved over shs.30m in my bank account. I am happy because I am able to look after my daughter and educate her,” Anek said.

She said that she enjoyed spending time with her clients in pubs in Gulu town and sometimes, her clients would send her money and they would meet in the neighbouring towns or districts.

“I had a client who used to call me in Kitgum where I would get good times and come back loaded. That life was so interesting and now I am going to miss it,” said Anek.

She bragged that during her working years, she never disappointed men during sex.

She added that most of her colleagues tended to push away the men who took too long to climax, so that they don’t get tired since they also have long lists of clientele to serve.

To prove that she was not telling fibs, many of her former clients kept calling her mobile phone during the interview.

In one of her conversations on the phone, this reporter could see that she was happy. The joy in her face could easily tell that she was talking to client she enjoyed seeing.

“An dong peatimo tic menu ba. Atwero miyo iri cim pa ngat mukene wek ilok kwede,” Anek told her client. Meaning I am no longer in the business, but I will give you a number of someone who does and you can talk to her.

What were the prices she asked for sex

She says that she avoided going to outskirts of the town with clients because she was afraid of being abused or tortured.

“At times they use you and refuse to pay. Sometimes they gag you because they don’t want you to make any noise because he is a married man and his children are also asleep in the same house,” she explains.