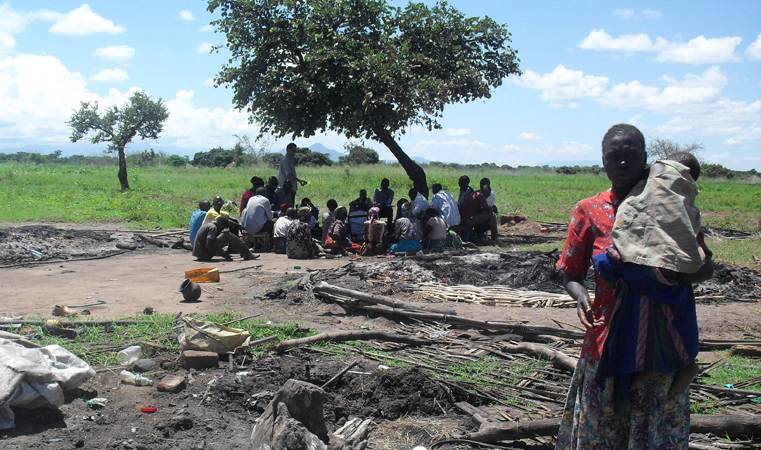 Grace Arach helplessly looks at what is left of her hut, as other families plot their next move under a tree

At least thirty families were left homeless and are living in the open after they were last week evicted from their huts following a bitter land wrangle in Laguri village, Ywaya parish in Padibe West, Lamwo district.

The affected families say that they were not aware of any impending eviction and were completely caught unaware when a bailiff, accompanied by a group of men totaling 15 in number and armed with axes, machetes, hammers and hoes, stormed their homes ordering them to leave before knocking their huts down and setting them ablaze.

The residents who say that they lost all their household properties, including food stuff, livestock and millions of shillings, have been left stranded at the scene while others have sought refuge on neighboring allotments of land and with relatives.

“We are aware that there was a dispute between our landlord and one Akena Justine but they never informed us about the intended eviction, they just came to my shop and ordered me to leave as they threw my merchandise out,” said Susan Alobo, a tenant who was operating a small shop on the piece of land.

Grace Arach who lost a grinding mill and saw shs.4 million shillings of her savings burnt to ashes said that the evictors broke the locks to all house whose occupants were attending to their crops in their respective gardens and set upon destroying them.

She explained that the affected families are stranded and have been reduced to living under trees, calling on district authorities to intervene by coming to the aid of the families and addressing their plight.

The district LCV Chairman for Lamwo district Mr. Mathew Ocen Akia, when contacted, condemned the act which he said had rendered the affected families vulnerable.

He also blamed the bailiff whom he identified as Okoth Guma John for failing to notify district authorities of his intentions to carry out the eviction and for luring a police officer to witness the eviction.

“I condemn this malicious act and I blame the bailiff who never followed procedures of notifying the residents and he also lured a police officer (Padibe west outpost Officer in Charge) to come and witness an eviction without notifying the area LCI, LC3 Chairperson, District security committee, DPC and district officials who could have assessed the impact of the eviction on the community before any eviction had been carried out,” Akia said.

He revealed that the district disaster management committee was set to visit the scene to assess the situation and send a report to the district and other line ministries so that relief is sent to the affected families.

The District Police Commander SP Ahmed Seguya Kimera said that the police was previously notified by the bailiff that a court order to evict was imminent.

“But we were still in the process of ascertaining the validity of the order and assessing the situation on the ground and the magnitude of the eviction,” he said.

He strongly denied any suggestion that he was aware that a police officer witnessed the eviction, adding further that, “I was shocked to hear that the court bailiff had hoodwinked the police in the area despite being told to adhere to the demands of the community.  We have launched investigations and will serve any disciplinary measures on the Padibe West police outpost OC should it turn out that they went ahead to witness the eviction without orders from the DPC.”

Omona and Okeny and their relatives who had settled on the land are that ones who have now been evicted.

Vigirino Lutoo Olweny, the father of Richard Omona and Simon Peter Okeny claims to have inherited the land from his grandfather who had stayed on the land since 1948.

According to the area LCI Chairperson Mr. Mathew Opwonya Labresse, Richard Omona and Simon Peter Okeny had won their case before the LCI Court, parish land committee and Sub County land committee.  But Justine Akena appealed before Kitgum Grade one magistrate court which ruled in his favour, leading to the eviction.