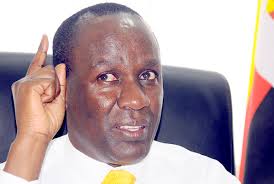 Mukula flew to Gulu by chopper on Saturday to preside over a defection from Amama Mbabazi’s TDA- Go Forward to NRM. But supporters of the independent presidential candidate say it w as fake a defection orchestrated by NRM supporters to ”eat” money from their party(Photo: Internet)

Members from the different political parties that support the candidature of independent presidential candidate Amama Mbabazi have criticized Soroti  municipality member of parliament and a campaigner for president Museveni, Mike Mukula for for presiding over what they say was a fake defection from the  Mbabazi’s Go Forward camp to the NRM.

On Saturday, Mukula who is a flight captain flew to Gulu by helicopter to preside over the defection by people who said they were supporters of Mbabazi to the NRM. The event took place at Acholi Inn which is owned by a senior officer of the Uganda Peoples Defence Forces, Brigadier Charles Otema Awany.

The Chairman TDA Go forward Gulu district Geoffrey Oyat said at a press conference at the Northern Uganda Media Club on Tuesday that the defections were ‘‘stage managed’’  by the NRM.

‘‘It’s very unfortunate that Mukula who is well known for corruption is once again seen spending tax payers money recklessly on events which are meant to deceive the president,’’  Oyat said.

Oyat said those who attended the meeting with Mukula claim were NRM spies who joined Mbabazi’s camp expecting free money which they never got.

Dan Odiya, another of the TDA Go Forward member at the press conference claimed that the 300 people who met Mukula at Acholi Inn were given 5 million and that after sharing the money each got 21,000 shillings.

Alfred Oluba, the Chairman Layibi division who also doubles as the publicity secretary TDA said he went to the meeting only to find that it was NRM members who were purporting to have switched from TDA- Go Forward.

Oluba explained that a former TDA- Go Forward member, Nyeko Walter, stole their register and began calling their supporters at the sub country to come and ‘‘eat money.’’

The Layibi Division Chairman said that after realizing that the intention of those who had gathered at Acholi Inn was to ‘’eat’’ NRM money, he left the venue.