Where is My Name on the Ministerial List, Cries Out Beatrice Anywar, No Mom, Cool Down, It’s a Fake List 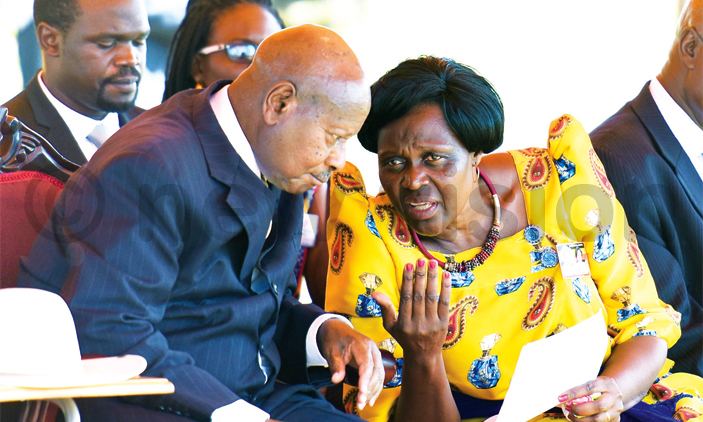 Anywar(in yellow) speaks to president Museveni at her thanks giving in May this year. She is reportedly eyeing a ministerial appointment (New Vision photo)

Tuesday evening, a list, purportedly of appointees in Museveni’s endlessly long and fat cabinet did the rounds online. Ever the eagle-eyed, Uganda’s chattering social media users were quick to note that the name of one prominent ‘‘minister’’ was missing on the list: Beatrice Anywar, the chameleon Kitgum municipality Member of Parliament.

When you speak to Acholi politicians, journalists, political watchers and even the ordinary  Okello and Acii on the streets, they will tell you without blinking an eye that Beatrice Anywar wants to be a minister. To back this up, they point to her sleeves littered with clever and, some say, desperate maneuverings to catch the president’s eye.

For quite some time corridor and street talk has been abuzz with rumours that Beatrice Anywar has a ‘‘back channel’’  to president Museveni. This itself is no crime by the way if its not driven by opportunism. In May Anywar augmented talk that she could be on her way to Museveni’s NRM eating house when it became a ‘‘yellow affair’’ at her thanks giving ceremony(she suffered a nasty accident this year from which she, thankfully, recovered) in Kitgum where President Museveni was chief guest and not  Kizza Besigye or Amama Mbabazi.

Anywar was elected Kitgum Municipality Member of Parliament on an Independent ticket. She was previously a member of the Forum for Democratic Change (FDC). In the presidential elections, she hobnobbed with Mbabazi’s Go Forward but when Besigye went campaigning in Kitgum, she literally forced her way to Besigye’s rally.

Being an Independent and ideologically neither here nor there, Anywar is literally up for grabs  by Museveni. Her days of championing ‘‘green’’ to save Mabira forest earning her the moniker ‘‘Mama Mabira’’ are long gone. She has no green traces today and her ideological stand is unclear.

Beatrice Anywar’s political tinkering is a sad thing for Uganda and her transitions to democracy because it contributes to entrenching Museveni’s Pakalastism. Another character in her lot is Kampala minister Betty Kamya who for years laboured, rightly, that  Uganda’s president has too much powers and that  these need reduction. Then she jumped on the gravy train and shut up.

The NRM is not as ideologically attractive today as it might have been at its founding. Today its ideology is Museveni and his longevity plans. The party’s new kids on the block are  people like state minister Evelyn Anite and the likes of Ibrahim Abiriga of Arua municipality (his best  ”contribution” during the budget speech was when Museveni gave him a pair of sandals in parliament).

So it is possible that whoever joins the NRM today joins on two points. One is  that Museveni is here to stay. Two is, join the eating race. Both have nothing to do with ideology or addressing Uganda’s Achilles Heels which has made it the black sheep in the original East African region:  the only country that hasn’t peacefully changed from one president to another .

Reference to a heart attack by Ofwono Opondo is apt for making it to cabinet is a matter of life and death in Uganda. For Anywar, whose heart might have raced when she first saw the list, take it easy mom, it’s fake.  There is hope that you could still be minister.