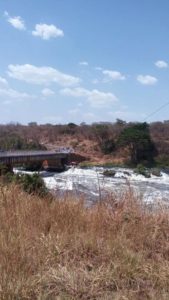 A search by Uganda Police Force and their counterpart the Uganda People’s Defence Force [UPDF] continues for three people who are feared dead after a lorry they were travelling in plunged into the fiery waters of the Nile at Karuma Bridge, Kiryandongo district on Friday evening last week.

The Tata lorry registration number UAW 356 C, laden with dried cassava was reportedly travelling from Paidah town in Nebbi District heading to Hoima District when the driver lost control and plunged into the river.

By 4pm Saturday, the bodies of the trio and the vehicle had not yet been sighted and retrieved despite heavy deployment of police and the army.

Police identified occupants of the vehicle as Mr Nelson Baraza, the driver, Mr Arafat Farid, the turn man and Mr Ibrahim Abonyang, the passenger who had hired the vehicle. The vehicle was hired from Soroti district according to one Umar Anwar.

Assistant commissioner of Police Charles Ssembabulide from the traffic and the Road safety Directorate who visited the site of the accident over the weekend said they are yet to deploy the police marine to search for
the missing persons and the vehicle.

“Efforts are still ongoing to ensure that the bodies and the vehicle is retrieved. The police marine are on their way, we shall do everything in our midst to get the missing people,” ACP Ssembabulide told Acholi Times. He said police suspects the vehicle is under the water with the body of the trio.

Mr Ssembabulide said the accident could have been caused as a result of the failure in the breaking system. Karuma Bridge is located on a sharp corner.

“The way the vehicle plunged into the river indicates the driver of the vehicle could have lost control while negotiating the sharp corner,” ACP Ssembabulide said.

He warned road drivers to reduce speed to less than 10 Kilometers per hour as they approach and cross the bridge for safety.