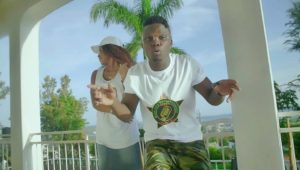 The singer was arrested Sunday with one Patrick Kinyera from Gulu town on allegations of assault and robbery.

The 24-year-old singer best known for his 2018 hit song ‘‘Anga Obed Mujony’’ was arrested over a February 1st incident in which he allegedly beat up his driver and drove away with the drivers’ car.

Okuni is a two times Northern Uganda Music Award [NUMA] artiste of the year winner for 2017 and 2018, respectively.

A police source told Acholi Times that Eddy Wizzy was released on police bond after reportedly agreeing to pay 1.6 million shilling to Walter Lacen, the driver of the car he hired early this month to transport his crew for music shows.

Acholi Times understands that Wizzy and his crew  hired Mr Lacen to take them for shows in Omoro and Kiryandongo districts  but developed disagreement with the driver along the way, roughed him up and bundled  him [ driver]  in the boot of the vehicle, a Noah car registration UAP 833R before driving away with the  car.

Mr Patrick Kinyera with whom Eddy Wizzy was arrested has also been released from police custody.

Aswa police spokesman Jimmy Patrick Okema said Mr Lacen  reported the matter to police and a case of assault and robbery was opened under SD: Ref 03/02/02/2019, but the suspects [Wizzy & crew] went into hiding until they run out of luck Sunday when police netted him.

Eddy Wizzy who is signed under ‘‘More Fire Entertainment Record’’ label is also famous for his hit songs like Weng Nono, Am sorry, Mot mot, and Mar Ni, among others.