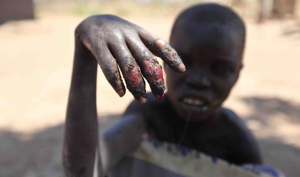 The only nodding syndrome treatment in Omoro district has closed after remaining non-operational for the last two months.

The centre located in Odek Sub-county closed after disagreement between the land owners on which the centre is located and Omoro Local Government.

The land owners had prior to the closure blocked the re-opening of the centre on grounds that there was no formal agreement between them and Omoro district.

Odek Nodding syndrome center was reopened in July last year after government injected Shs 170 million to run the facility, several months after its founder, Hope for Humans, had closed in down in December 2017.

Omoro District Local government later took over management of the facility which has 25 children being rehabilitated from the nodding syndrome.

Acholi Times understands that Omoro officials in December last year sent away the children to their homes during the Christmas break with hopes of resuming normal operations early January.

However, community members from Jaka Clan in Akoyo village, Odek Sub-county had who offered land for the facility protested it’s reopening demanding that a formal agreement be signed between the land owners and the district.

Alfred Olwoch, one of the Jaka clan members told this website in an interview that they had listed four major requests to the district officials and expected them to be met.

Mr Olwoch noted that 80 households from the clan had sat down and demanded donations of oxen and ox-ploughs, award of scholarships for their children, formal employment for their children at the facility, and 30 iron sheets to each household.

“It’s unfortunate that the district leaders have refused to make a formal agreement with us on our demands.  A similar demand was made to Hope for Humans when they had intended to establish the facility, but when they left, the community members didn’t benefit from anything,” Mr Olwoch said.

“We cannot accept them to open up the facility anymore without coming to us to make formal agreement on the demands we presented to them. It’s the only way we can benefit from our kind donation of this land,” he said.

Mr Toyota Oyet, the Chairperson Land owners said they are not against reopening of the land.

“In Our last meeting in January this year, we asked the District Chairperson to update us how far they had gone with following our demands but the answer was not convincing.’’

The Omoro District Chairperson Douglas Peter Okello however said the demands by the Jaka clan members are beyond the district’s budget.

“How can the district local government help 284 people to buy them ox-plough, oxen, employ them and offer their children scholarships with its limited budget? ” Mr Okello asked.

Mr Okello however said the closure of the center wasn’t necessarily on the demands of the clan members but the due to lack of fund to run inpatient activities for the 25 children who were being rehabilitated.

According to him, the fund sent by government last year was meant to carter for four months, a period that had already elapsed.

He said the closure of the facility will have a negative impact on the recovery of the 25 children who were being taken care of at the facility.

Mr Okello explained that unlike at the treatment facility were the children had access to proper medical treatment, personal care, special schooling and nutritious meals; the case is different from their homes m the homes.

The Omoro District Health Officer Mr Robert Ongom said they are extensively continuing with outreach programmes to ensure that health of the children doesn’t deteriorate.

Nodding syndrome is a mentally and physically disabling disease that only affects children, typically between the ages of 5 and 15.

An estimated 3,000 children mainly in Kitgum, Pader and Omoro districts were affected by Nodding Syndrome and some 130 have died since 2009 when it was first detected.

In September last year, scientists made a breakthrough research on nodding syndrome concluding that the condition is a result of abnormal deposit of protein in the brains. The findings conducted by Prof Michael Pollanen from Forensic Pathology at the University of Ontario, and Uganda’s consultant pathologist, Dr Sylvester Onzivua were published in Acta Neuropathological-Springer, a peer reviewed monthly journal on neuropathology.