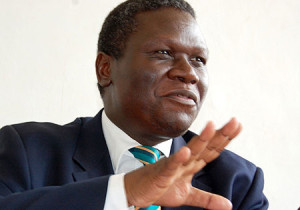 The Democratic Party (DP) has faulted security for blocking its meeting in Omoro district.

A team led by the Acting Omoro District Police Commander, Esiru and District Internal Security Officer (DISO), David Asiu on Thursday August 8th blocked a DP meeting in the district on grounds that it was illegal.

The party was meant to meet its members in the Omoro district council hall.

Siranda Gerald Blacks, the DP Secretary General in a statement said the party leadership is a two-week tour of the country to listen to members at the party’s branches, build consensus around certain issues he did not mention, and mobilize in the run up to the 2021 elections.

In the Sunday press statement, Siranda said security officials assaulted the DP National Youth Leader, Christopher Okidi he was trying to explain to them the reasons for the party meeting.

Siranda condemned security personnel in Omoro whom he said behaved in bad faith.

The DP Secretary General said the action of the police was unconstitutional and confirmed the view that the force is partisan and is only there to serve the interest of President Museveni.