Janani Luwum’s Wife to be Buried on Saturday 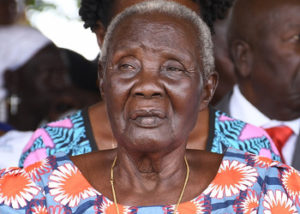 The widow of Archbishop Janani Luwum will be buried on Saturday.

Mary Luwum passed on Tuesday last week after a battle with cancer.

She will be  buried  at Wii Gweng, Mucwini Sub County, Kitgum district.

The body will be transported to Kitgum by Chopper on Friday.

Rev. Canon Aaron Mwesigye, the Director of Ethics and Religious Affairs in the office of the president last week announced that government will foot the bill for the funeral programme.

Stanley Ntagali, the Archbishop of Church of Uganda in a statement last week said Mary Luwum, 93, died at International Hospital (IHK) Kampala with cancer of the gall bladder.

She is survived by six children and many grandchildren.

Ntagali described as a faithful servant of God who like her husband inspired many.

Bishop Ntagali further explained that Mary Luwum will be remembered as not being ashamed of the Gospel by supporting her husband`s decision to not flee Uganda when threatened by then President Idi Amin, a decision that ultimately led to his martyrdom by Amin’s henchmen  on 16th February 1977.