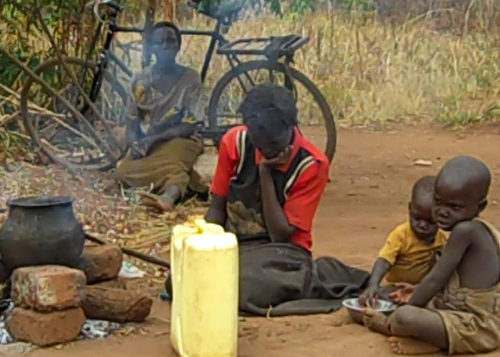 A woman cooks outside her hut which was burnt by UWA. Photo by Sam Lawino

They say that they wept and cursed to no avail. A section of women resident in Apaa in Amuru district claim that they were raped by Uganda Wildlife Authority (UWA) and Police officials in last Sunday’s exercise to evict them.

Looking at their houses that lay in ruins, the women held back tears as they emotionally narrated their ordeals at the hands of the security forces that took part in the eviction exercise.

(Ms Susan Anek not her real name) says that she is haunted her experience, because all she is sees is men taking turns to rape her.

“The rangers blame us for making their work difficult since they had told us to leave earlier; before forcing me into sex, they said that they should teach us women in the villages a lesson,” Anek said.

She continued that when UWA arrived at her home, they found them worshiping and so they ordered everyone to move out of the house, as two worshipers (men) emerged, they were hit with a pestle.

She said that the rangers told them that the “residents had become stubborn and reluctant to leave” what they called “East Madi Game reserve.”

Anek says that efforts to get counselling and medical attention have proved futile because she is afraid of being rejected by her community and deserted by her husband out of shame.

Rape is a serious crime under Ugandan law and attracts a death penalty on conviction. Under international legal instrument, it has been recognised as a weapon of war and victims are usually afraid to come out due to fear of shame or being rejected by their spouses or societies in which they live. 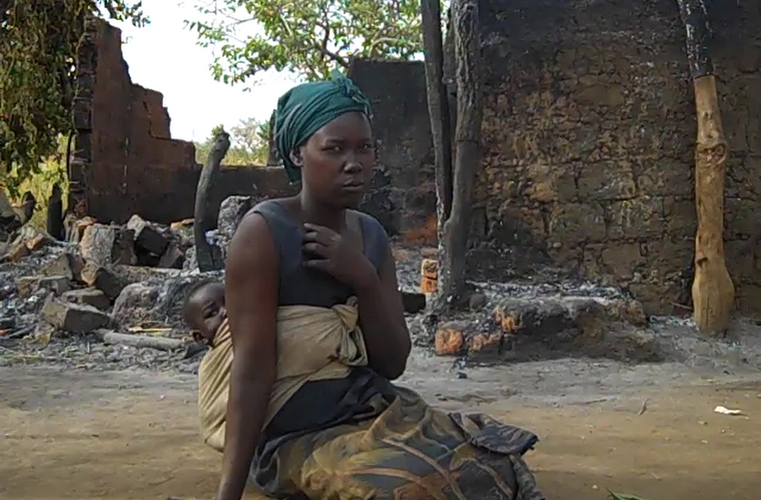 Woman sits besides her burnt hut

Anek says that she is aware of a handful of women who also underwent the same ordeal. Michael Opira, Anek’s husband says that he was not at home when the eviction began and on his arrival home he was met by very wild and angry UWA officials who were evicting his family,  with his wife partially clothed and sobbing in a manner that he had never seen before.

“When they saw me, they became very wild and started canning my head with sticks asking me why we were in the land belonging to the game reserve. They went to my granary and looted my honey, sacks of beans and peas, before setting the house alight” Opira said.

In some homes visited by Acholi Times, UWA officials were said to have ordered people to burn their own houses after forcing them to pile all their belongings outside.

Helen Atim, another woman who says that she endured a near similar ordeal told Acholi Times that men armed with guns pointing at them emerged from behind their home and began by asking for cattle but later said that she would be “taught a lesson” if she failed to meet their demands.

“We saw them coming from the bush, first they demanded for cattle and we told them they are not there. Again they ordered us to collect all property from the house and they asked where we would go but we replied we shall stay here. They grew very angry and hurled threats of rape at us but we remain quiet,” Atim said.

“After failing to have sex with us, they ordered us to give them money which was not available, they told us to leave the village” she added. 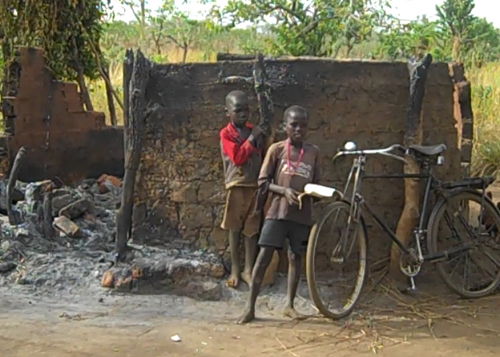 The children stand in front of their burnt out house

The residents said the forces were under the command of UWA officer Mr Julius Obwona.  Efforts to get Obwona were futile as his phone could not be reached due to network problem in the area.

UWA Area Conservation Manager Mr Tom Okello Obong said last month that the eviction was peaceful and voluntary, but also cynically revealed to Acholi Times that UWA want the land opened for a private investor by the name of John Bruce- a Boer – to develop it for sports hunting.

“The people know the land is for game reserve and they are here illegally. We in 2005 reached a tripartite deal with Lake Albert Safaris to have this place for sport hunting and lodges so that income and tourism is boosted,” Obong said.

Meanwhile the Acholi Parliamentary Group (APG) and local politicians in Amuru met with President Yoweri Museveni last Monday to discuss the developments in Apaa, top on the agenda was the controversial eviction.

The controversial NRM Pabbo Sub-County LC3 Chairman Christopher Ojera who attended the meeting described the incident as clandestine, an act that amounts to a crime and needed to be halted immediately.

“This negative development ranges from looting property, rape reports and burning of houses and killings which are signs of inhuman treatment by clandestine forces,” Ojera says.

Ojera told Acholi Times that President Museveni agreed to travel to Amuru to witness the incident suggesting that there should have been a clear process of compensation and alternative land for the people if government had in its plan to utilize the piece of the land for development.

{div float:left}{module Google Long}{/div}”He is green about the eviction, and it was only one man reporting to him, General Moses Ali of Madi, who was feeding a lopsided report and we think Museveni will honour his words and get the facts right, my people will not be subjected to pain again” Ojera says.

“If it means becoming a true NRM supporter is by carrying this kind of terror, am not that party member” a visibly angry Ojera fumed. Ojera also has his home in Apaa, which close to Adjumani border with Amuru at Joka forest.