Doctors Puzzled By Premature Puberty In A 3 Year old Boy 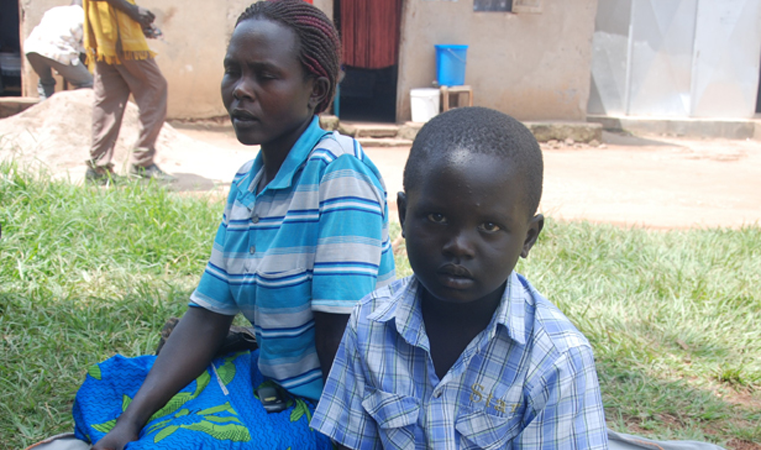 Jennifer Apoko 28 was left speechless when her 3 years son, all of a sudden, started crying day and night, in a tone equivalent to that of an adult. He also started wetting himself at anytime of the day and night.

Apoko says that she was so scared and thought that her son, Genesis Komakech, had been bewitched.

She says that she immediately consulted her mother and they soon realized that there was something seriously wrong, Komakech’s features were changing very fast.

“He was changing everyday. His manhood started enlarging like that of a grown man. His pubic hairs came and eventually pimples started coming from his face like an 18 year old boy,”Apoko said.

The 28 year old mother became very distressed and says that the thought of throwing Komakech away even crossed her mind, because it was getting too much for her.

“His body odour changed like that of a grown up man and he started experiencing puberty just like a grown up,” noted Apoko.

“I feared to share a bed with him at first because of the size of his penis which was so abnormal. I had not seen such a thing in my life,” she added.

Apoko rushed Komakech to Gulu Regional Referrals Hospital where doctors initially told her that they could not do much to help her son because they did not know what he was suffering from.

She says that they were referred to St. Mary’s Hospital Lacor where Komakech was put through test after test, and at times she felt like he was being used as a guinea pig, instead of diagnosis and treatment.

“We went to St. Mary’s hospital Lacor on many occasions and my son who was then experiencing many changes was becoming aggressive,” she said.

“He was able to see and judge every thing happening around him. He was also tired of moving to and from hospital every time; this made him very aggressive to both the nurses and me his mother,” added Apoko.

After some weeks, Komakech was examined by medics at St. Mary’s Hospital Lacor and it was established that, what Komakech was going through, was premature puberty.

What the medics say

Dr. Beatrice Odongkara, who has probed into Komakech’s sudden changes for over 3 months now, says that they suspect it to be premature puberty.

“When he was brought here, he was having a lot of pimples, adult body odour and he was so aggressive to everybody. Now I can see that he his improving so well,” Odongkara said.

Odongkara added that the course of medication will have to be maintained for at least another 10 and half years so that his hormones can be reduced.

“He can be effectively treated with medication. This treatment, called Gn-RH analogue therapy, usually includes a monthly injection of a medication, such as Leuprolide which delays further development,” said the medic.

According to Odongokara, the causes of premature puberty in 90 percent of girls are not known, however in boys, there are three main causes.

She said that one of the causes is brain stimulation of hormones known as gonadotropin-releasing hormone (Gn-RH).

“The pituitary gland is prompted to produce hormones, called gonadotropins. These hormones in turn stimulate the testicles or ovaries to make other hormones, testosterone or oestrogen. It’s these sex hormones that cause the changes of puberty, like breast development in girls,” Odongkara added.

The said that the hormones are known as luteinizing hormone (LH) and follicle-stimulating hormone (FSH) which are notorious and are always behind premature puberty.

Odongkara explained that Komakech could also have a tumour growing in his brain causing the brain to make premature puberty.

“We need to look at all the causes and see which one is the real cause,” she noted.

Odongkara appealed to well-wishers to come to the aid of Apoko and her son, “it may be a little bit expensive for poor Apoko to afford the medical bills since most of them are very expensive.”

“He will have to go for a CTI Scan, where his abdomen will have to be scanned and examine, measuring the adrenaline there. Later on he will have to under go a MRI test [Magnetic resonance imaging scan of the brain] where his brain will be scanned,” noted Odongokara.

“The two tests can only be done in Kampala and they are a little bit expensive”, said Odongkara.

She revealed that a MRI test costs about shs950,000 shillings, while CTI scan is at shs250,000 shillings in either Mulago or other private clinics in Kampala.

“The facilities are not found in many hospitals in Uganda unlike in Kenya,” she said.

“Following the tests, he will be given treatment to stop the premature puberty growth and the medicines will have to be got from Nairobi.”

“We are giving him contraceptives to reduce the growth but they are not enough. He needs more medicines and the two tests done,” Odongkara said.