War Affected Women And Their Children Petition Leaders For Reparations 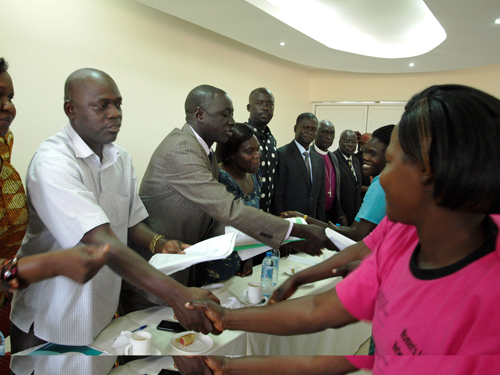 For most women and children in conflict zones, the dangers of war go far beyond the violence of combat.  In situations of armed conflict, women suffer some of the greatest health and social inequities in the world. They risk human rights violations, suffering and death that the world has failed to prevent ever since the UN charter on human rights was adopted.

In northern Uganda, women bore the brunt of the atrocities have equally played indispensable roles in peacebuilding and reconstruction efforts, despite a lack of recognition and continued marginalization. Despite their contributions to resolving the over two decades of conflict, women still continue to struggle for recognition and inclusion.

Through their umbrella organization, Women Advocacy Network (WAN) which is being supported by the Justice and Reconciliation Project (JRP), the members of the grass-roots organisation, say that the leadership at both the local and central government have forgotten them and have faikled to initiate policies which will aim to address the needs of war-affected women in the region, many of whom were abducted by the Lord’s Resistance Army (LRA) rebels during the two decades of brutal war, and their children.

The chairperson of the Women Advocacy Network Miss Amony Evelyn last week told members of the Acholi Parliamentary Group (APG) from Bomah Hotel in Gulu municipality that, urgent action also needs to be taken for the special needs of the children of war-affected women.

She said that the women wants their Members of Parliament to adopt a reparation policy so that they are fully supported, since they never had the opportunity to study and are now left stranded with children without the prospect of being able to guarantee them success in the future, since most odf them are without fathers.

Lino Owor Ogora of the Justice and Reconciliation Project (JRP) said that during their story telling sessions, the women also talked about the accountability processes for the atrocities that took place during the war which needs to be effected in order to aid reconciliation and healing within communities and throughout the country.

APG Chairman, Hon. Ronald Okumu Regean, also the MP for Aswa County told the women that the MPs have not forgotten their plight, but blamed the government for abandoning all war victims to NGOs.

Okumu also said that donors have notified them that they are still willing to support war victims in northern Uganda but still figuring how channel the money directly to the people on the ground rather than through governments due to rampant corruption.

He appealed to the women to understand that Members of Parliament from the entire Acholi sub region will continue to lobby donors for direct support.

Hon. Betty Aol Ocan, the Woman Member of Parliament for Gulu district said that there is also need for the government to facilitate district probation offices in the region to register all women war victims.

The legislator resprisenting Women in Lamwo County Hon. Sarah Lanyero Sarah adviced the women to engage in activities that will generate and improve household income, like crafts and tilling the land.

She added that, “Acholi Parliamentary Group will lobby for surgery for all of you who have health complications and are suffering as a result of the war.”

The Member of Parliament for Kilak County Hon. Gilbert Olanya said that there is need for affirmative action on funds for war affected women.

Meanwhile, the MP for Aruu County Hon. Samuel Odonga Otto Jr suggested that since most of the women are not allowed to own land by their families, MPs must ask government to degazatte some land from game reserves which can be handed over to disadvantaged women.