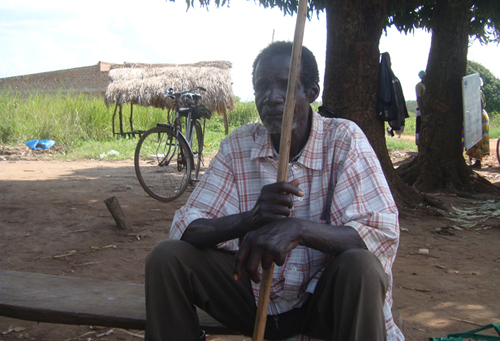 A 76-years-old resident of Ogul in Paicho Sub County, Gulu district says that he has been forced to abandon, after years of frustration; the pursuit of compensation for his animals that were robbed in broad daylight by gun wielding government soldiers.

Mzee Cosantino Ouma Ociti says that he lost 89 heads of cattle in 1988 and his disappointment is that he may die without receiving a cent in compensation for his loss and injustice at the hands of soldiers who should have accorded him protection.

Ociti says that he has spent the last 20 years running up and down from his home which about about 30km from Gulu town, and filling all kinds of forms and signing documents with the hope that he would get compensated, but all his efforts have fallen on barren ground.

“They came while I was releasing my animals for grazing in the early hours of the morning,” he said. “They took all my animals,” he adds.

Mzee Ouma who is among the 14,000 individuals from Acholi sub region, who are demanding compensation for lost property and animals during the war, says that what hurts him even more is the deceit being used to cover up the claim, which has resulted in him wasting a lot of money on transport to and from Gulu town.

“Now I sit together with my sons with no hope of getting anything. I lost all I had and government is not even bothering to consider my plight,” Ocitti angrily told Acholi Times.

According to Ociti, every time he visits the office of the Acholi War Debt Claimants Association, he has to pay a fee and yet he is very poor and cannot afford amounts of being asked.

He said that after years of being thrown back and forth, the anguish and numerous journeys have drained him and made him very weak.

“If the government wants to pay me, it is up to them,” he said. “I cannot continue running after what I have lost at this age. It is too demanding for me know.”

Ociti says that he is now going to turn to attention to his two acres of land on which the kraal used to sit and utilise it by planting crops.

But due to his advancing age and failing health, Ociti says that he may only manage to open 50 meters to plant cassava and maize for his survival.

Once considered to be wealthy in Acholi culture, Ociti now lives a life of grinding poverty with his sons who have failed to join higher institutions of learning due to lack of school fees and other school requirements.

Ociti says that to be a registered a member of Acholi War Debt Claimants Association, he had to pay shs320,000 shillings in legal fee, registration, office running costs and salary for the Executives of the association in order for him to register for claim of shs52,140,000 shillings in compensation for 79 cattle.

Currently, the government has set the value of each cattle at shs650,000 shillings.

In November 2008, in a letter written by President Yoweri Museveni to the association, government was set to pay over one trillion shillings to war debt claimants for their nearly six million herds of cattle that were stolen by the NRA soldiers.

However the claimants are demanding shs1.4 trillion shillings.

Engineer Noah Opwonya, the current Chairman of Acholi War Debt Claimants Association has continuously denied any allegation of irregularity and says that the majority of the claimant have already received 60 percent of their total pay.

He expressed hope that the government will soon release another shs20 billion shillings to settle the claims of some of the members of who have not yet had anything.

In the last twenty years, government has released about 10 billion shillings but due to corruption and mismanagement of over a billion shillings out of 6bn, few members have been partially paid for their lost animal.