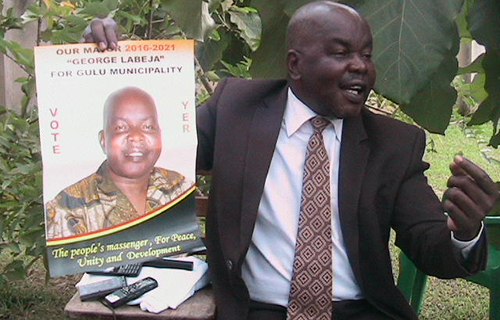 ‘‘I am very disappointed in the NRM big wigs in the district who are isolating me because I have stood my grounds. I refused to allow shoddy work in the district by denying them contracts,’’ Labeja claimed.

Labeja claims that Brigadier Awany wanted to be given the World Bank project which he refused.

This he said has created a lot of tension between him (Mayor) and Awany to an extent that they held a meeting in Tangi village (Awany’s residence) in order to front their own candidate in the primaries for position of Mayor.

During a press conference held at his residence last week, the Mayor revealed that he is running as an independent candidate after discovering that the Tangi resolution had already rigged more than 3000 votes in favor of Mr Alfred Okwonga.

He says that the big wigs in the party are just fronting candidates basing on the family relationship which are undermining democracy in the lower structures.

He says that in the Tangi resolution, the big wigs who included Brigadier Awany, Mr Richard Too-dwong, Mr Sam Engola, and Mr Avola George who is the NRM district registrar resolved to issue him a fake membership card so that he can’t even vote for himself during primaries.

The Mayor says that he will not allow to be intimidated by the group and that those who claim to be more NRM than others led to his decision to contest as an independent candidate.

He says that Otema who is always in charge of funds for mobilization has threatened to fight him (Mayor) until the end.

Otema Awany however denied the allegations by the Mayor saying Labeja is just afraid of competition.

“The mayor has been accusing me of brings Mr. Joaqim Labongo and now he is claiming that I am supporting Mr Okwonga. Those are total lies and rubbish he should not be a coward,” Awany said

However, another contestant in the race Mr Oweka Denis who wanted to contest under the NRM ticket says he has opted to contest on an independent position after receiving several threats from NRM big wigs in the district.