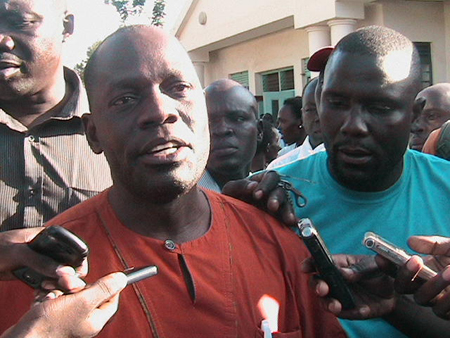 Kilak County MP Gilbert Olanya. He is expected to appear in court tomorrow(Thursday) in Amuru district to answers charges of inciting violence

Gilbert Olanya, the Member of Parliament (MP) for Kilak County in Amuru district is tomorrow (Thursday) expected to reappear before the Amuru Grade One Magistrate’s court to answer charges of inciting violence.

On the October 12,  the case in which the MP is accused of inciting violence failed to kick off after lawyers representing him asked for more time to study the case against their client.

MP Olanya had appeared before the Amuru Grade I Magistrate, Edward Okot to answer three charges related to the violent demonstrations in Pabbo trading centre and Apaa that erupted after the forceful demarcation of the contentious Amuru- Adjumani border demarcation.

Geoffrey Anyuru, the lead counsel for the Amuru legislator had asked court for more time on ground that they had not been served the court documents in time.

Anyuru accordingly asked court to adjourn the matter in order to them to prepare to defend the Amuru lawmaker.

Olanya was arrested by police September for allegedly inciting locals to take up machetes in order to the demarcation of the border point between Amuru and Adjumani.

Ponsiano Okello, the Senior State Prosecutor for Amuru says they are ready to proceed with the hearing.

Okello says they have already secured 42 witnesses and are ready to testify against MP Olanya.

The land in question led to protests in which elderly women from Apaa parish undressed before Ministers Daudi Migereko and the late Gen. Aronda Nyakairima.

The estimated 40sq km of land which borders Adjumani District is claimed by residents of Apaa on one side and Adjumani and the Uganda Wildlife Authority (UWA) on the other.