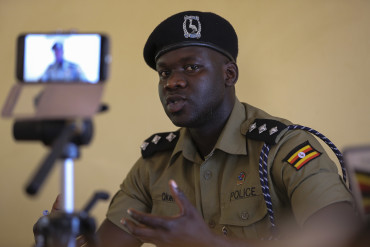 Two people are reported dead and six others  injured  on Tuesday morning  when the police vehicle they were travelling in overturned along the Karuma- Pakwach at Lolim in Purongo sub-county, Nwoya district.

The vehicle, a Toyata Hilux double cabin  registration UP 4812 belonged  to the Regional Police Commander(RPC) for Greater Bushenyi  Eddie SSerunjoji. It reportedly overturned after hitting a road sign at 1 am this morning, the Aswa region police spokesman Jimmy Patrick Okema said.

Okema revealed that the driver of the vehicle only identified as SPC Tusimwe lost control and hit a road sign causing the vehicle to turn several times.

Okema identified the deceased as Nanyonjo Harriet 38 and  Mawanda Sentamu 30, all residents of Mbuya in Kampala.

The occupants of the vehicle were returning from a burial in Arua district and heading towards Kampala.

The injured are getting treatment at Pakwach Health center IV while the body of the dead has been taken to Anaka Hospital in Nwoya district.

The wreckage of the vehicle at the time of filing this report was still at the scene of the accident, according to the police.

Police is investigating the cause of the accident. But considering the number of passengers in the vehicle, its possible that it may have been overloaded.