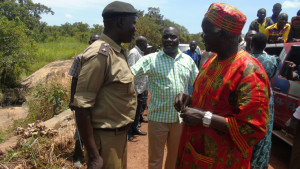 Rwot Yusuf Okwonga Adek, the cultural chief of Pageya clan has called on the youth in Acholi to take advantage of the prevailing peace and produce more children.

Rwot Adek said that large chunks of land in Acholi region have remained largely vacant due to low population and the only way to fill it is for the young to have multiple children.

Adek urged young people of child- bearing age to marry and have as many children as possible.

The Rwot did not however say how the young parents would meet the cost of health and educating the young children with the increasing cost of services in the country.

According to Adek, current talk of land grab in Acholi is because land is vacant and sparsely populated.

He asked the youth to shun modern family planning methods stating that it is unnatural and that it was not God’s intention to control birth in the first place.

He noted that if his mother had stopped with two children, he as the fifth children who eventually became the cultural chief would have not be born.

In 2015, the Aruu County Member of Parliament, Odonga Otto also urged the Acholi to produce more children as a weapon against grabbing of their land by what her termed selfish people.

With a population of close to 40 million people, Uganda is among the countries in the world with the highest fertility rate and population growth.