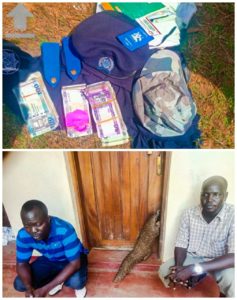 The suspects and the pangolin in the background

Police in the border town of Elegu in Amuru District have arrested two South Sudanese army officers as they attempted to smuggle a live pangolin into Uganda.

The pair were arrested on Tuesday at around 11AM as they crossed into Uganda through Nimule with the endangered animal, much sought for in China and other parts of East Asia.

A case of illegal possession of protected wildlife specie has been preferred against the South Sudanese under CRB number 26/2020. The animal is reportedly worth about 15 Million Ugandan Shillings in the black market.

Jimmy Patrick Okema, the Aswa River Region Police Spokesperson said the suspects were travelling in a South Sudanese registered Toyota Mark II registration number SSJS 330 B.  The vehicle has been impounded by police.

According to police, the suspects revealed that one, Akimbo Tabu had asked them to look for buyers for the endangered animal.

The pangolin has since been handed to Uganda Wildlife Authority (UWA) officials in Arinyapi in Adjumani district for safe custody.

Reports indicate that poachers  sell 1 kilogram of pangolin scales for about $45 to a middleman who in turn sell it for between $73 and $100 to agents of Chinese buyers. The prices rise  once the Pangolins or their scales get to Asia. Pangolin scales account for about 20 percent of its weight.

Police say investigation into the matter  is ongoing and plans are underway to take the suspects to Kampala.

Pangolins are now the most heavily trafficked wild mammal in the world. In Uganda, enforcement groups have reported a sharp spike in the numbers of arrests of poachers, coupled with significant larger seizures of pangolin scale. Trade in pangolins and their scales is banned.