Harriet Aber Laid to Rest, Hailed as an Enterprising Woman 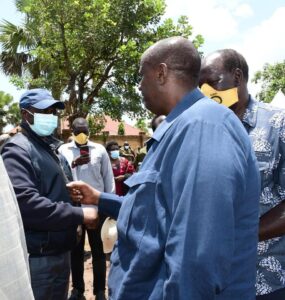 Harriet Aber, 47, an entrepreneur and mistress to Gen Salim Saleh( real name, Caleb Akandwanaho) was buried on Saturday at her home in Te- Dam Cell in Bardege Division in Gulu city.

General Caleb Akandwanaho, the deceased’s husband and President Museveni’s younger brother said his wife’s death is a big loss to him.

“She died at this time when our children are still very young. They are still at a very tender age,” General Akandwahaho said. Aber and Akandwanaho had triplets, two girls and a boy, all aged 10.

A joint team of UPDF and police pathologists are investigating the circumstances surrounding her death. Samples have been picked and taken to Government analytical lab for further analysis.

During her burial, Ambassador David Mwaka, an Uncle to the late said he is still reeling with pain from her death, describing Aber as a talented woman.

Mwaka said the deceased was enterprising and had initiated several projects in Nwoya and Amuru Districts before her death.

The Deputy Speaker of Parliament, Jacob Oulanyah who also attended the funeral hailed Aber as a great talent and shining star dimmed so soon. Oulanyah said Aber was an example of a gift of talent put to good use.

General David Muhoozi, the Chief of Defence Forces said Aber was a hardworking woman and that she protected the underprivileged and ensured that their land was not taken by grabbers.

While addressing the mourners, the Right Reverend Wilson Kitara, the Bishop of Kitgum Dioceses urged Christians to prepare for death since it is evitable.