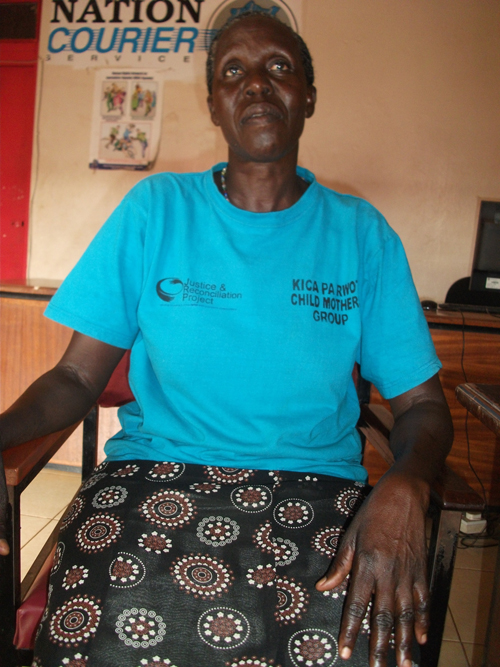 Pus still comes out of the wound which was ill operated on while Ms Alice Adong escaped from captivity where she spent 14 years.

Adong was injured when a bomb exploded when the Lord Resistance Army and the government soldiers were fighting in Aruu area in southern Sudan in 1999.

Some particles entered her lower abdomen and due to lack of proper medical care and operation, the wound has failed to heal properly, pus and sometimes blood still oozes out of it which keeps her worried.

“Am in pain, and I have tried hospitals within but they just give me antibiotics which have not done much. I feel I need better operation. At times I feel like having no leg on me when it begins to pain, then the left leg also begins to pain as well,” she said.

Adong a mother of three says that she is also the breadwinner at home but because of the pain she goes through, she cannot do heavy work.  She can only do some cleaning for people which she feels will affect the education of her children.

She was abducted from their home in Odek Sub County in Gulu district when she was only 22 years and managed to return in 2002 with three children. She says that the father of her three children died when she was still in captivity.

The Medical Director of Gulu Regional Referral Hospital Dr Anthony Onyach noted that Adong’s situation needs further investigation so that an operation is done for the second time.

“There could be some foreign elements that have refused the wound to heal, she should seek proper medical care before the wound becomes cancerous,” he said.

In 2009, the government registered civilians who were physically injured in the two-decade insurgency to get support in terms of treatment, but nothing has since materialized.

At least 6,000 people were registered in the exercise, many of whom still have splinters in their bodies.

In 2001, African Psycare research organization, an Association of Obstetricians and Gynecologist of Uganda (AOGU) and Department of Orthopedics at Makerere University carried out a joint treatment in the former camps and in their report, revealed that only a quarter (24%) of the women had accessed a qualified health worker for their problems. Sexual function was adversely affected, 22% had unstable or broken marriages and 32% were not able to work.

Many patients presented with untreated or poorly treated fractures some closed while others were open or compound fractures that were often painful, with pus from secondary infection leading to loss of function of the affected part of the body