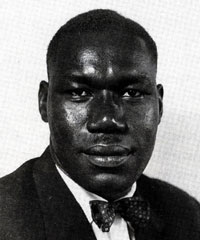 History is a mirror of society which should reflect its past and must acts as a guide to the future. History must never be about a pack of tricks we play upon the dead.

We as Ugandans are poor learners from history. The past maybe the past, but facts will always remain sacred. History is not a plaything; it cannot be tailor-made to suit one group or the other. Nor can it be tempered with to promote a specific viewpoint in order to annihilate another group.

A sense of pride among Acholi sons and daughters can only be generated if we are true to our heritage and legacy and do our job diligently and honestly in remembering our past in order to feed the Acholi of tomorrow with the role our forefathers played fostering our future.  It is in line with this that I want to remember an illustrious son of Acholi who played key role in fostering unity and good relationship among Ugandans and not only Acholi. Acholi must celebrate contributions to Acholi, Buganda and Uganda as a whole.

{div float:left}{module Google Sq 2}{/div}Daudi Ochieng, MP was a former Kabaka Yekka Member of Parliament born to Rwot (chief) Lacito Okech from the clan of Koch, Gulu district in 1925. Rwot Lacito Okech, was appointed a county chief by the British Colonialist after the Lamogi rebellion in 1911. Rwot Okech like his son Daudi was a linguist, who spoke fluent Luganda, Lunyoro, Nubian, Madi and Kiswahili.  As a colonial government policy, Rwot Okech sent his children including Daudi Ochieng to Budo via the Kabaka’s palace. Daudi Ocheng, went on to attain a Bachelor’s degree in Agriculture from Aberyswyth Univeristy, Wales. The same University also attended by another prominent and illustrious most recognised son of Acholi, the poet, novelist, and social anthropologist whose three verse collections—Song of Lawino (1966), Song of Ocol (1970), and Two Songs (1971)—are considered to be among the best African poetry in print.

According to family sources, Daudi Ochieng spoke excellent English and flawless Luganda, a rare distinction because he was Acholi.  His Luganda was so good that he was one of the very few non-Baganda students who were regular Luganda lesson readers in the chapel during Sunday and other services.

According to available historical evidence, Ochieng was the architect of the political marriage between the Kabaka Yekka and UPC, who formed the first independent Uganda Government on 10th October 1962. He was consequently rewarded with being elected a member of Buganda Lukiiko in 1962 to represent the kingdom in the National Assembly. He was one of the only three non-Baganda, namely, Mrs. Visram, an Asian, Mr. James Simpson, a British, and Mr. Daudi Ochieng, an Acholi.  The three acted in the interests of Buganda in the National Assembly and acquitted themselves honourably without political prostituting and betraying their electorate and appointing authority, they also remained to loyal to their regions, in his case to the people of Acholi.

A problem that was beginning to rear its ugly head in Uganda in the early 1960s was corruption within certain levels of government; something which was to implicate Prime Minister Obote himself. He was alleged to have been involved in the smuggling of gold, ivory and coffee from Zaire (then Congo Kinshasa) with the collaboration of Col. Amin.

The politicians of those days unlike these days were people of high moral integrity, nationalistic and patriotic. Actions of gluttony and national shame were not tolerated through acceptance of a few million shillings from the executive for ”facilitation”, but were careful investigated and exposed on the floor of Parliament.

On February 4, 1966; Daudi Ochieng, lived upto the expectation of the Ugandan people and to the moral persuasion of his traditional Acholi roots, when he “burst open a life threatening boil to the Uganda polity” by introducing a bill calling for the establishment of a commission of inquiry into the activities and the suspension of Col. Amin until such inquiry was completed.

“That this House do urge the Government to suspend from duty Col. Idi Amin of the Uganda Army forthwith pending conclusions of police investigations into allegations regarding his bank account which should be passed on to the appropriate authority whose decision on the matter should be made public.”, his motion read in part.

Obote’s response and retribution came on February 22, when he had five of his cabinet ministers (Ibingira, Magezi, Lumu, Kirya and Ngobi) arrested during a cabinet meeting and held without trial; suspended the constitution, and assumed all executive powers. On February 26, rather than suspend him, Obote appointed Amin as his army commander.

On March 3, Obote dismissed the President and Vice- President and assumed the functions of the presidency. On April 15, the he formally abrogated the constitution during a parliamentary session and a ‘Revolutionary’ constitution was adopted by MPs who had not even seen it beforehand let alone debated its contents. This constitution later came to be known as the ‘pigeon-hole’ constitution.

A Judicial Commission was set up to investigate the ‘Gold Scandal’ and Mr. Ochieng returned from an overseas trip to testify before the commission. Curiously, he was taken ill with “stomach pains” and was admitted to the government hospital at Mulago where he died on June 1, 1966 at the tender age of only 41 years. The explanation of his stomach pains leading to his death provided by the government was not believed by most people, the family knows the exact cause of his death. However, to Ugandans it remains a mystery 47 years later.

Daudi Ochieng may your soul rest in eternal peace (RIP)