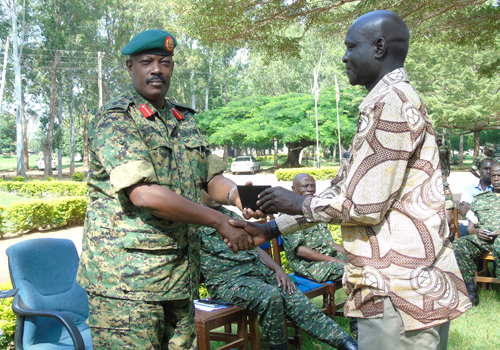 The army has warned its retired servicemen against getting lured into rebellious activities saying they will pay a great price for such mistakes.

Brig. Kayanya Muhanga, the 4th Division Army Commander says some of the ex- army officers will be approached to fight against the government in a bid to overthrow it.

While officiating at the retirement of 59 former army officers last Friday in Gulu, Brig Muhanga noted that, “People are well aware that the former combatants are well trained, individuals will try to lure them using money so that they can launch rebel activities in the jungle of the Democratic Republic of Congo (DRC).”

He said, “Dozens of army officers have been tricked in the same manner. Those who have not yet fallen prey to such promises of jobs in the bush, please give it a second thought.”

Brig. Muhanga warned that such acts will be a great mistake since it will not yield fruit though many will be tempted with promises to offer them huge sums of money for their participation in a rebellion.

The army commander noted that, “The soldiers were retired not because they were tired but simply because they have served diligently. Those who were indiscipline ended up in prisons for various offences.”

According to Muhanga, with 2016 general elections months away, some politicians who he described as wrong elements will want to take advantage of the situation to recruit ex- army men as party agents in order to cause chaos.

He also urged the retired officers to maintain discipline saying they can be recalled to serve in UPDF led peace keeping missions in volatile countries such as Somalia and the South Sudan.

Mr Charles Okwera, 53, who served the UPDF for the last 27 years, says, “I am tired of fighting, I now want to start farming instead of thinking of fighting against the government.”

Okwera, a former staff sergeant said after securing a loan from Wazalendo Sacco, an army finance lending institution, he bought two pairs of oxen and will embark on opening land so that he takes care of his four children.

“During my service especially at the peak of the war in Northern Uganda, I survived a lot of ambushes. Some of the bullets left my left hand partially paralyzed.”