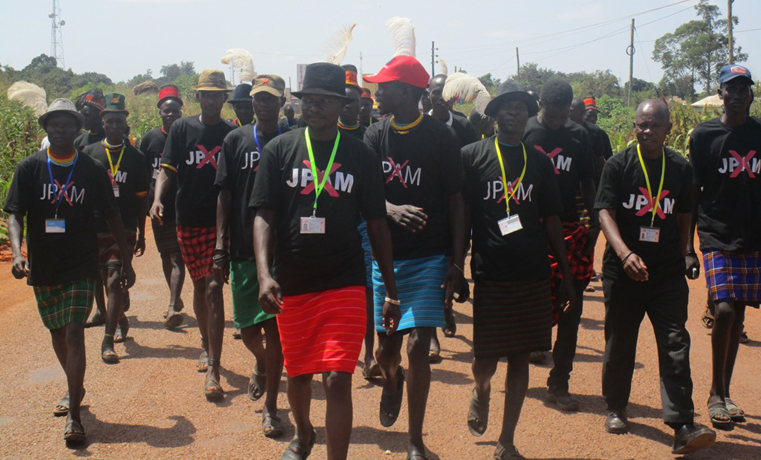 Over 800 people from the greater North on Friday morning gathered at corner Kamdini in Oyam district to march to Karuma to demand for accountability from former Prime Minister, Mr Amama Mbabazi.

This comes after Mbabazi declared his interest to contest for presidency in the next election.

They were clad in black T-shirts with messages appealing for the return of Peace Recovery and Development Plan (PRDP) funds meant for the people of Northern Uganda.

Otto Odonga   who mobilized the youth for the peaceful demonstration said that it is shaming   that some members in the opposition including his party Forum for Democratic Change (FDC) who are against the PRDP accountability demand have received Shs2billion from Mbabazi.

Odonga Otto said that if FDC puts Mbabazi as an Inter Party Coalition party flag bearer in 2016 election then he is willing to leave FDC and rather stand on an independent ticket.

“If Amama Mbabazi is to be president then will shall raise our flag and immediately form the Nile republic because we can’t accept to be led by a thief, Odonga Otto said.

He also advised President Yoweri Museveni to make sure he compensates all the cattle lost in Northern Uganda to the National Resistance Army (NRA) saying it is one of the unsolved questions in Northern Uganda.

Ogik Emmanuel, a member of the National Resistance Movement (NRM) said, “This is not a matter of a party but an issue of unity. Northern Uganda has demonstrated this in the match that they can do something bigger.”

Mr William Namok, the LC3 vice chairperson of Nabilatuk Sub County in Nakapiripirit District said they came from Karamoja sub region to send a message that Prime Minister Amama Mbabazi stole the PRDP money and should not disorganize Uganda with his presidential ambition.

He said Karamoja is still backward and still needs a leader like Mr Museveni to let it be developed.

The meeting later agreed to have another greater North meeting to generate a greater north manifesto that will be handed to all presidential candidates.

Mbabazi who was last week arrested on his way to Mbale to consult with the people there is expected to be in Gulu on July 14th.