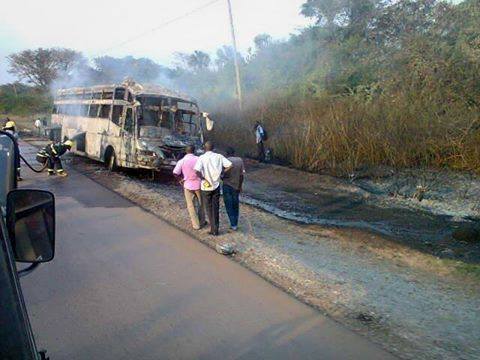 Dozens of pilgrims who were traveling from Arua to Kampala to attend a mass that will be presided over by Pope Francis on Friday morning escaped unhurt after the bus they were travelling in caught fire along Pakwach- Olwiyo road.

Jimmy Patrick Okema, the Aswa Region Police Spokesperson confirmed the incident and said the California coach which plies Arua-Kampala route was on its way to Kampala.

Okema said when the bus reached Tangi in Nwoya district, travelers noticed smoke coming from it and quickly evacuated.

The police spokesman said the passengers were part of pilgrims travelling to attend mass in Numugongo in Kampala where Pope Francis is expected to be the main celebrant.

Police said fire brigade could not save the situation since they received the report late but added that they have commenced investigation into the cause of the fire.

This is the third fire incident involving buses which ply  the Kampala highway from northern Uganda.

Following the incident, police ordered companies that have buses which ply long distances  to install firefighting equipment in their vehicles.