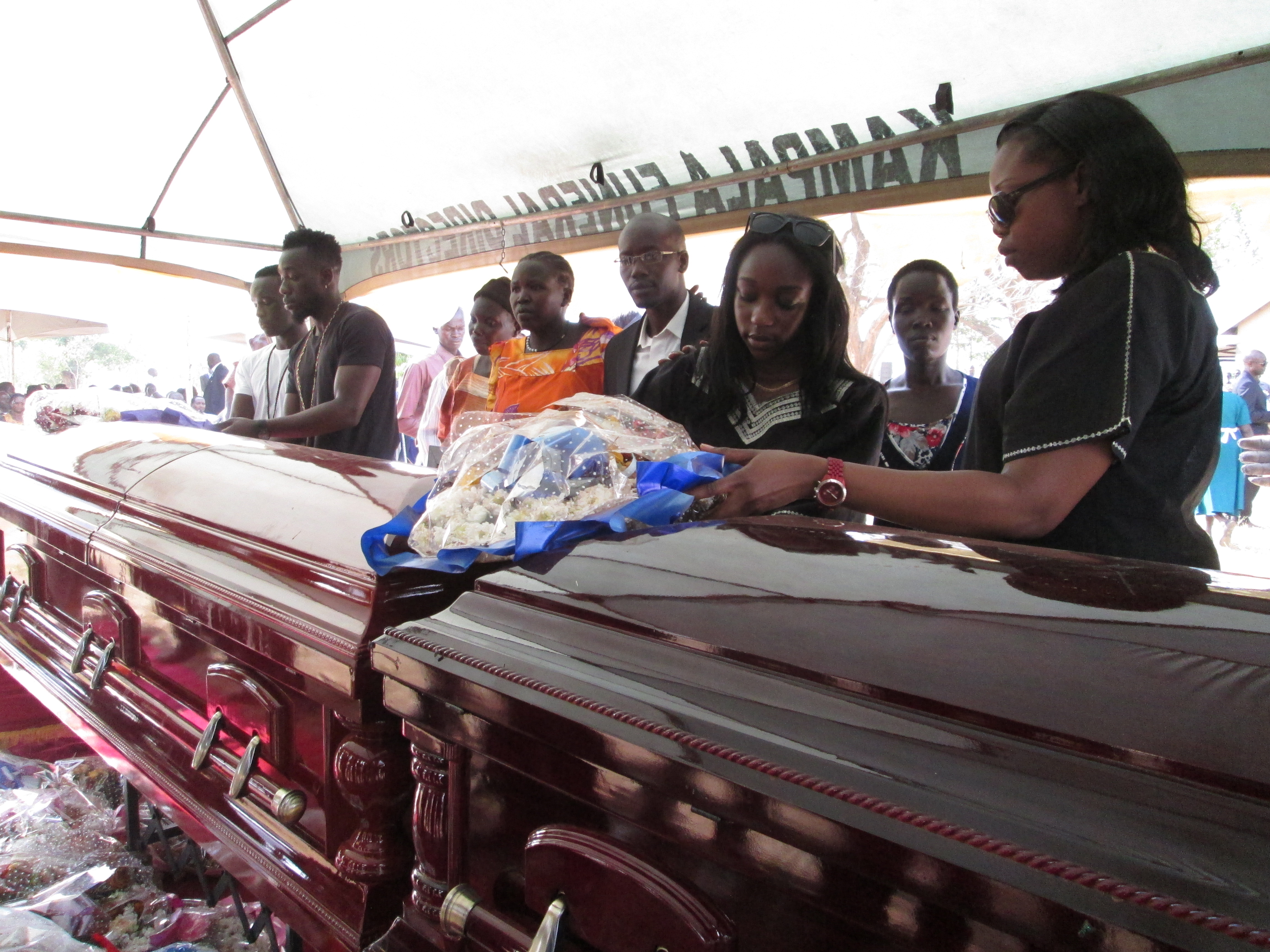 The late Obonyo’s children lay a wreath on a coffin containing remains of their grandparents.

It was a somber mood in Malech Poyamo village in Madi Opei Sub County on Saturday as the late Dr Henry Benjamin Obonyo, his wife Kevina Asio Obonyo and two daughters–Majorie and Elizabeth Obonyo were laid to rest.

There were travelling to their ancestral home, Malech Poyamo. Obonyo and his family lived in the United Kingdom.

His two grandchildren who were in the car survived the tragic accident which happened at St Thomas Moore, Minakulu in Oyam district.

Monsignor Vincent Ojok, the Kitgum Christ the King parish priest described the death of Obonyo and his family members as the ‘‘the most tragic.’’

Monsignor Ojok said the Obonyo family is God fearing, loving and caring. He encouraged the bereaved family to endure with Christ during the trying moment and asked mourners to emulate Dr Obonyo for his invaluable services to Uganda and world.

Carol Obonyo, a daughter of the deceased and a survivor of the grisly accident commended those who supported her family after the accident. Carol Obonyo and  her nieces are recovering from injuries sustained during the accident.

Rebecca Amuge Otengo, who was the Chief celebrant also the state minister Northern Uganda, represented President Yoweri Museveni. The president said he was saddened by the tragic loss of an illustrious son of Uganda and the world at large.

Museveni described Dr Obonyo as one of the few unsung heroes who fought Idi Amin’s regime, represented Kitgum North Constituency in 1980s, and contributed to the medical field through his work as a urologist, consultant doctor and a professor who lectured in Uganda, Africa and many parts of the world.

Dr. Henry Benjamin Obonyo served as health minister during the 1985 Tito Okello Lutwa’s regime until January 26 1986 when he fled to exile in the United Kingdom when the National Resistance Army (NRA) took over power.

The president condemned reckless driving and indiscipline among road users saying it has led to the demise of productive citizens. He contributed 10 million shillings in addition to what he had earlier offered as his condolence