Ravaged By Age, Clipper The Nanga Great Goes Blind, In Need Of Your Help 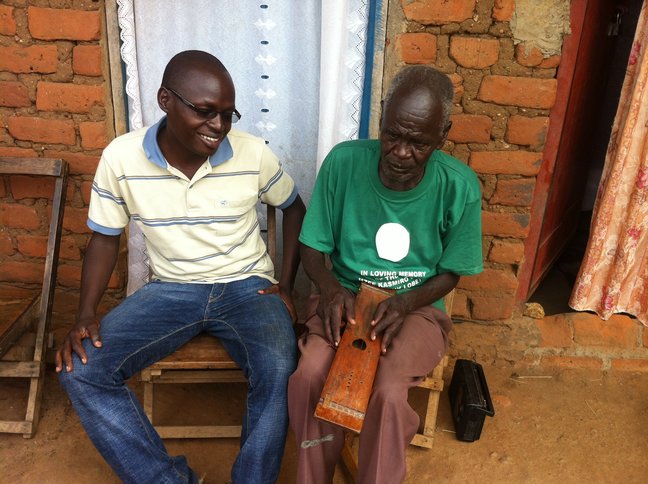 Ogwang Clipper Phillip(in green) plays some of his most beautiful songs for the writer at his home in Ginnery, Pandwong division in Kitgum municipality. Clipper is diabetic and blind, always in need of medication and a diet recommended by doctors. The costs are too high for him to afford as he no longer works.

In his prime no one sang and played Nanga as sweetly as Phillip Ogwang Clipper.  If you an Acholi and a Nanga music lover, and you are hearing for the first time that Clipper is also Phillip that is because Clipper has always been Clipper.

Even now when his frail body is ravaged by old age and diabetes, and his once soothing voice vanishing, when he picks his Nanga to bellow out a great song from the past, his voice is instantly recognizable, he becomes energized and traces of the silkiness and beauty that made him a mainstay in Acholi homes flows in bountiful supply.

That Clipper would turn out a Nanga star was a prophecy made by another Nanga star– Lakana Omal from Lamogi in then Gulu now Amuru district.

‘‘Where are you from,’’ Clipper recounts Lakana Omal asking him in an encounter in 1969. It was a Nanga contest that pitted the budding Clipper against the mighty Lakana.

‘‘It was a big contest. Lakana was very famous. His songs used to play on the gramophones. I think they are now called CDs, ’’ recalls Clipper with nostalgia written all over his face ‘‘It [the contest] took place in Acholi Inn Hotel.  Entry was by ticket!’’

As expected, Lakana won the contest but his eyes had caught the glittering talent in the young Clipper.

‘‘When Lakana is no more in this world,’’ Clipper remembers Lakana prophesying after the contest ‘‘no one will beat you.’’ Indeed in his prime  and for most, if not for all his  Nanga music career, no one beat Clipper in stringing the Nanga to produce ballads from the heart; dirges from the soul and of course songs about his much beloved Agago, his home, where he was born 83 years ago.

Where the master lives

Ginnery, Oryang Ojuma in Pandwong Division in Kitgum municipality is about one and half kilometers east of Kitgum town. The village is home to a spinning mill from where it likely gets its name. It is in Ginnery Oryang Juma where Ogwang Clipper lives. The path to his home branches off the Kitgum Matidi road.  His home, a simple brick and mud house with three detached rooms, with grass thatched wattle huts next to it. It is here where the Nanga master  lives with his third wife, the much younger Sabina Lawino who confesses she fell for the singer because of his voice and Nanga skills.

‘‘I used to hear him sing,’’ Lawino explained how it all began ‘‘Then when his wife passed on, I came and told him ‘‘let’s stay together.’’ And together they have been since 2006.

For the last three years, every time I have visited Kitgum, I have visited Ogwang Clipper at his home.  The first time I visited, I had no idea where his home was.  But I had been told his home was in ‘‘Ginnery.’’ So to Ginnery I went.

‘‘Where is Clipper’s home,’’ I asked a group of young men milling about in front of a kiosk.

‘‘Over there,’’ came the response in a chorus.

For the most recent visit, I called him on his cellphone. ‘‘You will find me home Musa ( he pronounced it as Muca),’’ he responded, calling me by the Islamic version of my given name Moses.

A master with no sight

‘‘Since you were last here,’’ Clipper told us—I and two colleagues —‘‘I received visitors. One of them is called Diabetes. He came here, liked my eyes and took them away,’’ he joked in his characteristic humorous style as if oblivious of the gravity of his medical situation.

‘‘Now I can only see shadows,’’ he said ‘‘like what you see from a far of people walking in the village path in the evenings, when it is getting dark.’’

‘‘The visitors first came in 2004. They kept coming and taking away some body parts and leaving others non- functional.’’

Clipper was born in now Agago district 83 years old. Then it was still part of Kitgum district. His father was an Acholi and his mother from Lango.

‘‘My father was a Muluka in the protestant church in Lira Palwo. He was called Nakuconi Bala. My mother was Dolophina Angom from the Oyima clan in Apac—the same clan as that of Milton Obote [former Ugandan president].

By his own account Clipper says he has composed 420 Nanga songs in his long career.  He played for us several of the popular and beautiful ones including ‘‘Golo Oywelo’’, a song about an ‘‘ugly, rich, smelly, man with fingers like the back of a tortoise’’ but who ends up marrying a young woman Clipper loved.

‘‘I sang that song because an ugly rich man who had cows took away a beautiful woman I was in love with because I was poor with no cows.’’

A brash With Idi Amin

During the dreaded regime of the autocrat Idi Amin, Clipper worked at Hill Top Hotel in Kitgum. ‘‘Oh, it was smart hotel.  Those days it was a very good hotel. We would be very smart in our uniforms. Planes would land in Kitgum bringing government officials who would be reside at Hill Top.’’

Clipper composed songs in praise of Amin for chasing away ‘‘Bangladeshi’’ and ‘‘giving Ugandans sugar.’’ But it wasn’t long before Amin ‘‘unearthed his claws’’ and ‘‘started killing people,’’ says Clipper. He hit the autocrat with a song lampooning the dictator. Amin sent his dreaded men for him.

‘‘I got a phone call from Kampala that ‘‘opipic’’ (a predatory bird that eats chicks) were on their way to Kitgum. I escaped.’’

In most of Clipper’s old songs, there is always a constant voice: Josephine Adong’s, the famously ‘‘July’’.  But in 2006, Adong passed and Clipper took on Sabina Lawino with whom he lives todate.

‘‘When Mzee’s wife died he was left alone as his children no longer live with him. I told him, ”let us live together,’’ said Lawino who herself is  singer who played a supporting role when Clipper  was still an active.

Although he is famous in Acholi and even beyond, life is hard for Clipper. He needs constant medication and eats only select food on the recommendation of doctors.

‘‘Sometimes he collapses in the house. So I have to always be near him,’’ says Lawino . ‘‘ That means I am unable to do anything to get money to support the family.”