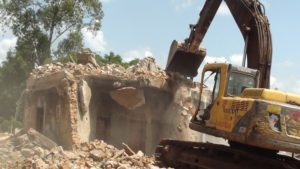 Gulu Municipal authorities On Wednesday brought down St Luke Guest House, as they launched an exercise to demolish old and dilapidated structures within the Municipality.

The building which for many years has been unoccupied was condemned in August 2009 after part of it collapsed and killed two children, leaving one with a broken limb. The children were sheltering rain from the dilapidated building when it collapsed.

According to municipality authorities, more than 200 old and dilapidated structures, kiosks, semi-permanent buildings and grass thatched huts are expected to be demolished in the four divisions of Pece, Layibi, Bardege and Laroo.

This follows a 2010 assessment carried by municipal engineers and health experts that recommended destruction of 114 buildings found to be old and unfit for human habitation.

Mr Patrick Lumumba, the Bardege Division LC3 Chairperson who supervised the launch of the demolition exercise said the exercise aims at beautifying the municipality by getting rid of old structures that are a danger to life.

His Layibi Division counterpart Alfred Oluba, said some of the buildings marked for demolition have been harboring criminals who have been terrorizing residents of Gulu municipality.

“We want to destroy these buildings so that the criminals are chased away from town, we want to improve on security of the town and also beautify it,” said Oluba.

Mr Oluba threatened that the exercise will be extended to other areas with dilapidated buildings earmarked for demolition.

But Mr Leonard Odoki, the Chairperson Association of Properties Owners in the Municipality said the threats will tantamount to contempt of court.

Odoki said the group of property owners he leads secured a court stopping the demolitions. The court order, according to Odoki, remains in place till August 18.

He refuted claims that the court only protects five litigants who took Gulu municipal to court.

In February this year, Gulu Municipal authorities issued a 14 day ultimatum to landlords whose properties were marked as condemned but the exercise was stopped twice through court injunctions issued in March and May this year.