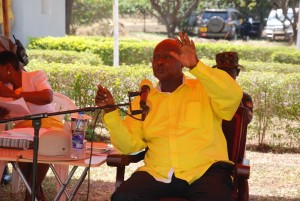 An agreement for the project construction was signed in 2013 between government and Mapa, a Turkish Construction Company to the tune of US $1.970 billion.  However, in the same year the contract was awarded to Gezhouba Group, a Chinese company.

In 2017, government kept on hold construction work due to financial constraint.

During his recent visit to Gulu, President Yoweri Museveni announced that government cannot fund the project because it intends to focus on construction of railway lines in the country.

Museveni disclosed that government is still waiting for an investor to undertake the construction project since it has no money.

Museveni was last week addressing journalists from State Lodge at the Forth Division Army barracks, in Gulu.

The Ayago dam in Nwoya district is under the Ministry of Energy and Mineral Development (MoED). It involves the construction of a hydroelectric power plant that will be developed in two phases as Ayago North and Ayago South.

Uganda Electricity Generation Company Limited (UEGCL) has been appointed by MoED as the implementing agency.

Japan Government through the Japan International Cooperation Agency (JICA) in collaboration with the Government of Uganda in 2008 started preparations for environmental impact assessments and International bidding for a contractor.