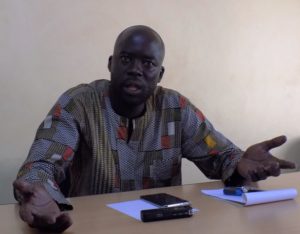 Aruu County MP Odonga Otto. A Gulu- based has sued him for defamation and is demanding for 200 million

A Gulu based journalist is demanding for a two hundred-million-shilling compensation from Aruu County Member of Parliament, Samuel Odonga Otto.

Geoffrey Ojok Okot of Choice FM in Gulu accuses Odonga of defaming him. Okot alleges that Otto claims he (Okot) stole one million shilling from him (Otto).

Okot on July 12th filed a civil suit of defamation against the legislator at Gulu High Court through his lawyer Kaitesi Zeridah of Daniel M. Walyemera & Co. Advocates.

According to the suit, Otto is alleged to have said that Okot stole the money from him (Otto) on June 16 this year during a football match at Pece Stadium between Acholi and West Nile province.

The alleged defamatory material was published by Otto on his Facebook page on Facebook on June 16. Court has fixed November 19 for hearing.

Odonga is also battling an assault case against the same journalists which also stemmed from the same football match on the same date.

Okot on June 16th this year accused Odonga of punching him; the matter was filed at Gulu Central Police Station Vide 50/16/06/2019.