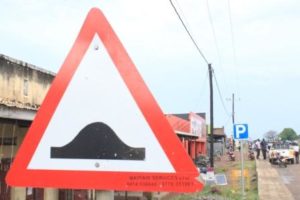 Vandals have been stealing road signs along the Nwoya- Pakwach road

The theft are along the Nwoya-Pakwach road in Nwoya district.

Several bridge rails and culverts have been vandalized from Ayago Bridge and Laminawuc Stream in Koch Goma Sub County.

Simon Opiyo, L.C.II of Amar Parish, Koch –Goma Sub –County says they have recovered some road signs but have not arrested any suspects.

“Right now as I speak, a number of road signs in Amar Parish, Koch Goma Sub –County have been vandalized but no one has yet been caught,” Opiyo said. “One week ago, the same vandals stole bridge rails at Ayago Bridge.”

Patrick Okello Oryema, the Nwoya District Chairman told our reporter that his office has received numerous complaints on vandalism, adding that a team has been deployed on the ground to search for the stolen items.

Oryema revealed that their investigations show a section of youths from Nwoya are conniving with some outsiders to steal the road signs.

Barnard Byakagaba, Gulu Station Manager of Uganda National Roads Authority in Nwoya (UNRA) blamed the communities in Nwoya for failing to notify them (UNRA) about such thefts in time. Mr Byakaga said that this would have prompted them to deploy enforcement team from the directorate of infrastructure protection to stop the vandals.

Byakagaba appealed to the general public to be very vigilant and report any cases of theft of road equipment to police so that the culprits are brought to justice.