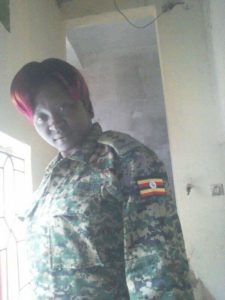 Pastor Florence Lanyero was picked by police backed by UPDF officers from her home in Kasubi, an outskirt of Gulu Town on Sunday afternoon.

Pictures making rounds on social media show Pastor Lanyero in full uniform with a rank of a Captain.

Jimmy Patrick Okema, the Aswa River Region Police Spokesperson confirmed the arrest of the pastor during a press briefing at the Northern Uganda Media Club on Monday afternoon.

Okema said the pastor is being held at Gulu Central Police Station for questioning.

Recently, the UPDF warned youth and musicians in the northern Uganda against army uniforms. The warning follows reports of abuse of army uniform by a section of youth and local musicians who don military gab.

Major Caesar Otim Olweny, the 4th Division Army Spokesperson says such individuals will be subjected to investigations and charged.

The UPDF Act 7 of 2005 section 164 (1) (a) and (b) prohibits any person, without authority, from manufacturing, selling, offering or exposing for sale, wearing or using any uniform supplied to or authorized for use by the Defence Forces or any uniform so nearly resembling it.

Violation of this provision attracts, on conviction an imprisonment term not exceeding seven years.