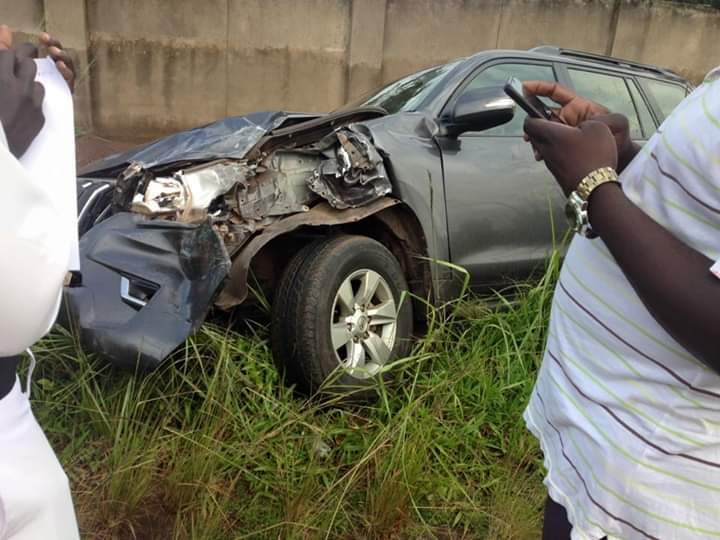 The Leader of Opposition’s car after the accident (Online photo)

The Leader of Opposition in the Parliament of Uganda Betty Aol Ocan on Monday morning survived a nasty accident along Gulu –Kampala Highway.

Aol who is also the woman Member of Parliament for Gulu District was traveling to Kampala for a meeting when her official vehicle ramped into a pickup registration number UAX 888V, smashing the front part of the vehicle.

The accident occurred at around 7 am in Bobi Sub –County in Omoro district.

According to Aol, the pickup that was right ahead of them stopped abruptly and that her driver tried to break but it was too late.

“When we reached frontiers in Bobi Sub –County, ahead of us were two pickups. One was driving ahead of us and the other was parked at our right-hand side. The one driving ahead of us made an abrupt turn and my driver could not brake suddenly hence we knocked it from behind as it branched towards the gate of the school.” Aol explains

Aol, her personal bodyguard and Denise Nono who was driving the official vehicle escaped the accident unhurt.

Aol also revealed that if the lead car had been ahead of them a usual, they would not have gotten into that accident but that the lead car remained in Gulu to fuel.

“We left the lead car to look to fuel—that was the beginning of the problem. The lead car was always there to open for us the way.”

Denise Nono, the Driver of Hon. Betty Aol Ocal told our reporter in an interview that both the vehicles have been parked at Bobi Police Station in Omoro district. Aol did not proceed with her journey to Kampala.

Peter Mugabi, Omoro District Police Commander confirmed the accident saying the driver of the pickup who is yet to be identified has been detained at Bobi Police Station for questioning.