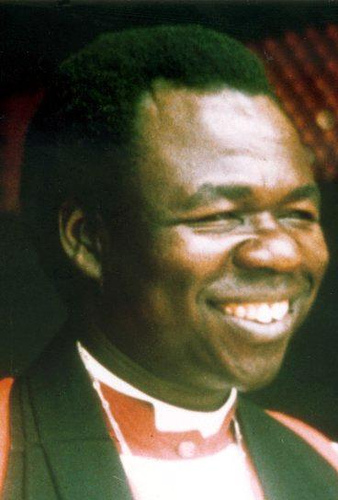 Archbishop Luwum was a leading voice in criticizing the excesses of the Idi Amin regime that assumed power in 1971. In 1977, Archbishop Luwum delivered a note of protest to dictator Idi Amin against the policies of arbitrary killings and unexplained disappearances. Shortly afterwards the archbishop and other leading churchmen were accused of treason.

On 16 February 1977, Luwum was arrested together with two cabinet ministers, Erinayo Wilson Oryema and Charles Oboth Ofumbi. The same day Idi Amin convened a rally in Kampala with the three accused present. A few other “suspects” were paraded forth to read out “confessions” implicating the three men. The archbishop was accused of being an agent of the exiled former president Milton Obote, and for planning to stage a coup. The next day, Radio Uganda announced that the three had been killed when the car transporting them to an interrogation center had collided with another vehicle. The accident, Radio Uganda reported, had occurred when the victims had tried to overpower the driver in an attempt to escape.When Luwum’s body was released to his relatives, it was riddled with bullets. 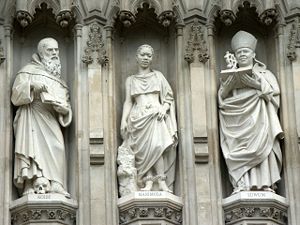 According to the later testimony of witnesses, the victims had been taken to an army barracks, where they were bullied, beaten and finally shot. Time magazine said “Some reports even had it that Amin himself had pulled the trigger, but Amin angrily denied the charge, and there were, of course, no firsthand witnesses”.

Janani Luwum was survived by a widow, Mary Lawinyo Luwum and nine children. He was buried at his home village of Mucwini in the Kitgum District. He is recognised as a martyr by the Church of England and the Episcopal Church (United States) and his death is commemorated on 17 February as a Lesser Festival. His statue is among the Twentieth Century Martyrs on the front of Westminster Abbey in London