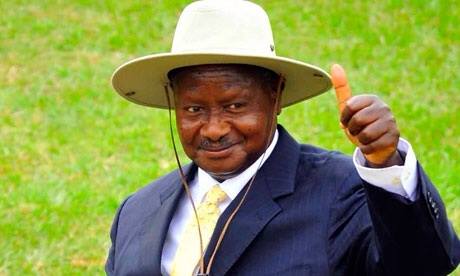 Hullabaloo about the Chief Guest

From being ‘‘Chief Viewer’’ of the eclipse to ‘‘Chief Mourner’’ and many more, it is not madness if one asserts that Uganda has been reduced to having only one Chief Guest. Events organisers around the country worth the ink used to write their names know this fact—that President Museveni’s is Uganda’s only chief guest.

How a country of close to 40 million people got to be reduced to such a lamentable heap is a matter for another day. For now  there is hullabaloo among the Acholi elite– on and offline–about the wisdom or the lack of it in Ker Kwaro Acholi (the Acholi cultural institution) extending an invitation to president Museveni to be a Chief Guest at the  Acholi Cultural Festival scheduled for 14th-16th December.

At the time of writing this, there were media reports that Ker Kwaro had sought refuge in semantics to explain their logic in  invitating the President as Chief Guest. But to that later.

One of the earliest salvos in the brouhaha over Ker Kwaro’s invitation of Mr Museveni was fired by the lawyer and human rights activist, Nicholas Opiyo who said he won’t attend the festival because of the invite to the president.

Others soon followed. ‘‘They [organisers of the festival] want to use Acholi in the political mortgage market,’’ opined Christopher Okidi, a lawyer studying his bar course at the Law Development Centre and National Youth leader of the Democratic Party.

Rwot David Onen Acana II is a calm man who speaks with pose. His abode is unremarkable except for the hill on which the house sits, giving the place a remarkable majestic feel in its simplicity. ‘‘Wi Got’’ [Atop the hill] is how locals simply call Acana’s residence.

Over the years the Acholi Paramount Chief has with dignity weathered a barrage of attacks and insults against his leadership from Acholi politicians and his fellow cultural leaders. Yet the irony is that every time there is a crisis those that attack him make a beeline for his palace in search for solutions.

Acholi people expect a lot from Acana II but do not give the cultural leader and the cultural institution the support it needs to play an effective and meaningful role in Acholi life. Too much expectation of the Paramount Chief, but no resources for him to conduct his traditional roles, has left Acana in a precarious quagmire that has weakened his position and that of the institution.

With no money from his subjects disempowered by war, Ker Kwaro turned to donors for funding. But donors are strict on how their money is used.  It wasn’t long before Ker Kwaro fell out with donors due to the, in the NGO jargon, ‘‘accountability issues.’’ At that time, the top technical man was Kenneth Oketta. He was fired from his job and replaced briefly with P.P Okin, now a member of parlaiement from Kitgum district. Okin was replaced by Ambrose Ola, a man with experience working for the local government and the NGO sector.

A smart public relations idea risks spinning on its head

But Ambrose Ola has been quietly working up things at Ker Kwaro. First to firefight the mess that Oketta had left. Two, to regain confidence of donors. Three, and most importantly, for Ker Kwaro to gains a place in Acholi hearts by becoming relevant.

The Acholi Cultural Festival is one of those moves that is undoubtedly aimed at winning hearts and connecting Ker Kwaro to the people. It is a master public relations stroke. But like all public relations moves, a crisis -causing risk was lurking not far away. For Ker Kwaro, it came through Museveni.

But Museveni’s henchmen and women came before him, taking up strategic roles in organizing the festival. One of them is the Mega FM Manager, Irene Atek. A behind- the-scenes NRM player with reported links to the intelligence services and personally known to the president, Atek is the Treasure of the festival’s central organizing committee. Her choosing has treasurer may have been a case of shooting many birds with one stone. On one hand, it may have been an attempt by the NRM to influence the festival by taking up strategic roles. On the other, it may have been Ker Kwaro smartly positioning itself with people who have access to the president. But it may also have been purely because Atek is Manager of the influential Mega FM, a key mobilization platform in Acholi.

President Museveni has never been a loved man in Acholi. Across the country support for his ageing regime is on the wane. His trajectory domestically and internationally is on a nosedive.  Mugabe’s recent fall in Zimbabwe saw him lined up by the western media among leaders who should go next.

But Museveni still has his fingers firmly on the levers of power.  But like all strongmen, he will only know when it’s time up when it’s already time up. His maneuvering to strike off article 102(b) from the constitution that currently bars him from running for office in 2021 is so unpopular ( a recent civil society poll put the percentage of Ugandans opposed to his maneuvering to remove the age limit at 85%). But Museveni is pressing on moving forward with his scheming.

”Museveni of the NRM knows what he wants, but he doesn’t seem to know (and appreciate) what Ugandans want.” wrote Saturday Monitor columnist Asuman Bisika.

It is this context of a polarized Uganda and an unpopular move to amend the constitution that Museveni was invited by the Acholi Cultural Institution. In a way it’s not really a Ker Kwaro problem that Uganda has one Chief Guest; it is a Uganda problem in which Ker Kwaro finds itself caught up.

Seeking Refuge In Semantics & What is the way forward?

It is a catch 22 situation for Ker Kwaro. Invite Museveni, you’re damned. Don’t invite him, you’re still damned. So what should it do? At the time of writing this, the narrative from Ker Kwaro on Museveni’s invitation was straight from spin books: He will be a ‘‘Guest of Honour’’ but not the ‘‘Chief Guest’’ goes one explanation. Another goes that the Acholi people will be the most important at the event.

“Our most important guest for the festival is the Acholi people but the rest will come to bear witness” Olaa Ambrose, Premier, Ker Kwaro said at a  press conference yesterday.

Cultural affairs is also an aspect of public affairs which as demonstrated by Mr Olaa involves managing multiple and often conflicting interests using semantics.  Ker Kwaro is riding with the Leopard  while at the same time using it  in a hunting spree. Let the festival go on.