In the end, Everyone Took A Bite Of the Acholi Cultural Festival 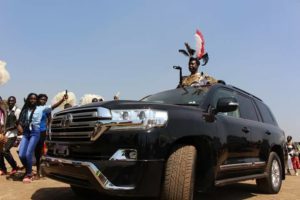 Rwot Onen David Acana II arrives for the festival in a gleaming 4X 4. The cultural festival will likely boost his leadership and role of Ker Kwaro in Acholi. But he should watch out for scheming politicians (social media photo)

David Onen Acana II arrived at the grounds of the cultural festival in style, atop a glittering  4X4, decked in royal regalia and looked every inch a royal.

The well attended festival took place from Dec 14- Dec 16 at Kaunda Grounds in Gulu town. It was an eats, dance and fun affair.

President Museveni whose invitation sparked controversy  honoured the invitation and as expected made a pledge of 200 million shilling to  the cash-strapped  Ker Kwaro Acholi, the Acholi cultural institution.

Like the wily and adapt politician that he is, Mr Museveni could not naturally forget to score some political points: I ordered for the chasing of Balaalo from Acholi, he told the gathering.

Balaalo is a term used to loosely describe a nomadic and roaming group of cattle keepers mostly from western and central Uganda, always out and about on the lookout for water and pasture for their animals.

Acholi and its pasture -rich but sparsely populated plains has in recent years become a magnet for the Balaalo and those involved in the cattle trade. Locals view the cattle keepers with suspicion; as harbingers of cunning plots by the greedy politico-military elite in Acholi and Uganda to grab their land.

At the cultural festival, whinny Acholi armed with smart phones and hooked to Facebook and Twitter posted in real time pictures of the events, and of themselves enjoying traditional delicacies. But not before whining that the president’s security detail had been a hindrance to their being able to get good shots on their phones.

Opportunistic NRM cadres in Gulu who had been rattled by initial opposition to the president’s invitation as chief  guest by the loud-mouthed online sighed with relief after the festival ended without incident( in the NRM a negative incident against the party in the presence of the party Chairman can be career-ending).

Acholi politicians also took a bite of the cultural festival cherry, displaying, with an eye on the voters, how much they love Acholi.

‘‘It’s been an incredible showcase of culture, tradition and history,’’ a gratified Deputy Speaker of parliament and Omoro county Member of Parliament, Jacob Oulanyah posted on Twitter.

Oulanyah is one of the few Acholi politicians perceived to be ‘‘in-things’’ and ‘‘eating big’’ in the Museveni government. He’s not the most popular of Acholi leaders though.

No Losers, Only Winners

Ker Kwaro Acholi which for long seemed lost in strategic direction finally appears to have got something that if it can utilize well will help it build a strong bond with the Acholi people, old and young, rich and poor.

Cultural institutions are generally facing a crisis of relevance. Ker Kwaro is no exception. The institution will have to innovatively and continuously think of how it can connect to its ”subjects” and be relevant in a changing context..

Rwot David Onen Acana II got off the festival a confident man and with a probably sense of feeling that he’s  fully the ‘‘Rwot of Acholi’’ after years of being harangued by ‘‘insiders’’ like the stubborn Rwot Yusuf Adek of Pageya.

But Acana and his handlers will have to work harder to bring everyone on board, further boost on the profile of the festival while keeping an eye on the prize: making Ker Kwaro relevant to the day-to-day and long term challenges that Acholi faces.

To be able to achieve this will require brinkmanship in balancing varied and conflicting interests, as it  appears to have done with the just concluded festival in which everyone won something; Museveni came and spoke, Acholi showcased their dance, food and culture, Ker Kwaro got a financial boost, the opposition had a representation and the young enjoyed themselves.

With lessons learnt from the festival, the next could be better. But  Ker Kwaro must watch out for sneaky and calculating politicians less it takes a dagger in the back and gets sucked in the polarisation that Ugandan politics is.