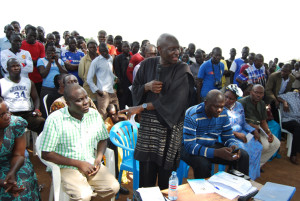 Residents of Apaa Township which was recently moved by government from Amuru district to Itirikwa Sub County Adjumani have rejected a mobile measles vaccination being conducted in the district.

The District Health Officer for Adjumani, George Bhoka, said the community in the area stopped health officials from erecting tents for mobile clinics in the disputed land on grounds that they suspected the health officials are land grabbers.

Mr Bhoka revealed that measles broke out in Adjumani in February this year. He named the affected areas as Itirikwa, Ofua, and Pakele sub counties and Adjumani town council.

Bhoka said in a phone interview that no child was vaccinated in Apaa in the on-going mobile vaccination drive due to resistance from the community.

In Amuru, Apollo Okello, the district secretary for health said they received over 15 cases of measles but the district health team equally cannot access Apaa due to safety concerns.

According to Okello, health services in Apaa is on a standstill since Apaa Health Centre II was closed in September 2018 due to protracted conflict pitting the Uganda Wild Life Authority(UWA) and the locals.

Amuru district chairperson, Michael Lakony described the situation in Apaa as pathetic because the community could neither access better health services nor education.

Sylvestre Odoki, a local leader in Apaa said residents of the area move for over 40 kilometers to nearest Pabbo Health Centre III in Pabbo Sub County to access health services.

Patrick Olwedo the District Health Officer-DHO also said they are vaccinating children against measles in Amuru but not Apaa Township which he says is in Adjumani district.