Gulu Cuts Budget By Over 500 Million As Funding Drops 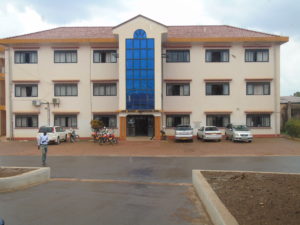 The Gulu district local government headquarters . The district relies on revenue from the central gov’t (Photo by James Owich)

A drop in funding from the Central Government has forced Gulu district to cut its proposed annual budget by over 507 Million Shillings in the new financial year, 2019/ 2020, according to the budget estimates tabled before council recently.

In the current financial year running 2018/ 2019, Gulu budgeted for 34.4 billion shillings to finance development activities in the district.

However, in the new financial year, the proposed budget dropped from 34.4 billion shillings to 33.9 billion.

Simon Peter Oola, the Gulu District Vice Chairperson explained that the slight decrease in the annual budget is due to a drop in funding from central government.

According to Oola, government will in the coming financial year release only 933.8 Million.

In the next financial year, central government is expected to fund 94.2 percent of the budget which translates into 31.594 billion shilling.

The most affected sectors by the budget cut are; Health, community- based services, natural resources, education, road and engineering, water and internal audit.

But funding for administration increased from 8.70 billion to 9.2 billion.

Finance department also saw an increased in funding from 243. 7 million this financial year to 457. 4 million in the next financial year.