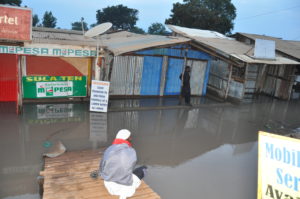 Business premises were closed after the floods

Several traders and residents of the busy Uganda-South Sudan border town of Elegu in Amuru District have been displaced after their business premises and homes were submerged in flood water.

The most affected areas were Elegu ward and Lorikor wards, all in Elegu Town council.

Michael Komakech, the Elegu Town Council Town Clerk told Acholi Times in an interview on Monday last week that hundreds of people had abandoned their homes and businesses premises for high grounds to protect themselves.

Mr Komakech said many houses and business premises were submerged. He put the number of affected at 300.

With the current heavy rainfall in northern Uganda, Komakech said he fears the river will continue to break its banks.

“Every June and August, many people suffer losses and this translates to low revenue collection for both the local government and the central government,’’ said Odiya who added that ‘‘Government needs to assess the problem and act on it’’.

John Mukasa a mechanic whose shop was submerged says although he didn’t lose any property, he fears his business will get affected.

“We can’t continue operating in this manner well knowing that when it reaches June, we shall lose,” Mukasa said.

Traffic along the busy Gulu- Nimule road was temporary affected due to the flooding.

This is the fourth time Elegu is getting flooded due to River Unyama breaking its banks. In August 2017 two people died and more than 30,000, mostly traders were displaced by flood water.