Assessment for Installation of CCTV Cameras in Gulu Complete 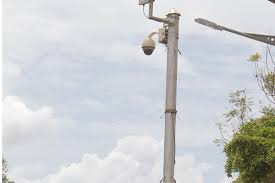 Experts from Police Directorate of Information Technology and Information (ICT) have completed assessment and mapping of Gulu Municipality for the installation of Closed-Circuit Television (CCTV) cameras.

The assessment and mapping is meant to get locations where the devices will be installed, and the camera towers built.

Patrick Jimmy Okema, the Aswa river region police spokesperson says the team identified five places where the cameras will be installed, among them schools and major streets in Gulu.

The police spokesman did not however disclose where and when the cameras will be installed.

The installation of the cameras in urban centers and towns followed a directive from the president following waves of insecurity and murders in Kampala. Some critics however say the cameras might also be used to check on political dissent.

For now, the planned installation of cameras in Gulu has been welcomed by a section of the public. Consolate Stella Atim, a resident of Pece division said the cameras will help curb crime in Gulu municipality specifically against women. Crime has been on the rise in Gulu.

According to Wokorach four riders have lost their lives to thugs in Gulu between July and August while 38 motorcycles have been robbed this year alone.

Statistics from police in Gulu indicate that seven motorcyclists have been robbed of their motorcycles at night within Gulu municipality between March and August this year.

Some of them have succumbed to injuries during the robberies while others are nursing injuries.

Parliament in April last year approved 400 billion shillings to purchase 5,552 CCTV cameras in the country. The exercise commenced from Kampala in July 15th. The cameras are procured from the Chinese.