Man Gets Life Sentence for Murder of Gulu University Lecturer 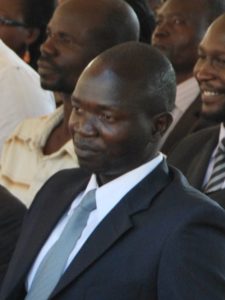 The late Andrew Rackara was murdered at his home in Pece in Gulu in 2014. High Court has sentenced to life in prison Patrick Ocaka alias Oryem Richard for the murder.

The Gulu University was gunned down as he returned home from watching the live screening of a World Cup football match.

The deceased gave Ocaka 33 million shillings and a Toyota Land Cruiser to buy for him two reconditioned pickup trucks from Juba, South Sudan.

In May 2019, Alikan Majid Ojera, one of the three men charged with the murder of Rackara turned into a state witness after he was convicted.

Ojera was convicted under a plea bargain arrangement and was sentenced to 10-years in jail for his role in the murder. Ojera the trial judge how the killing of Rackara was planned and executed.

Ojera said he ferried Rogers Opiyo, one of the murder suspects to Rachkara’s home in Pece Division in Gulu Municipality on a motorbike before the latter was shot dead.

Police recovered guns including an AK 47 and a pistol used in the murder from a garden in Patiko Sub County, about 20KM north of Gulu town.

For this role in the murder of Rachkara, the judge handed Ocaka life sentence.