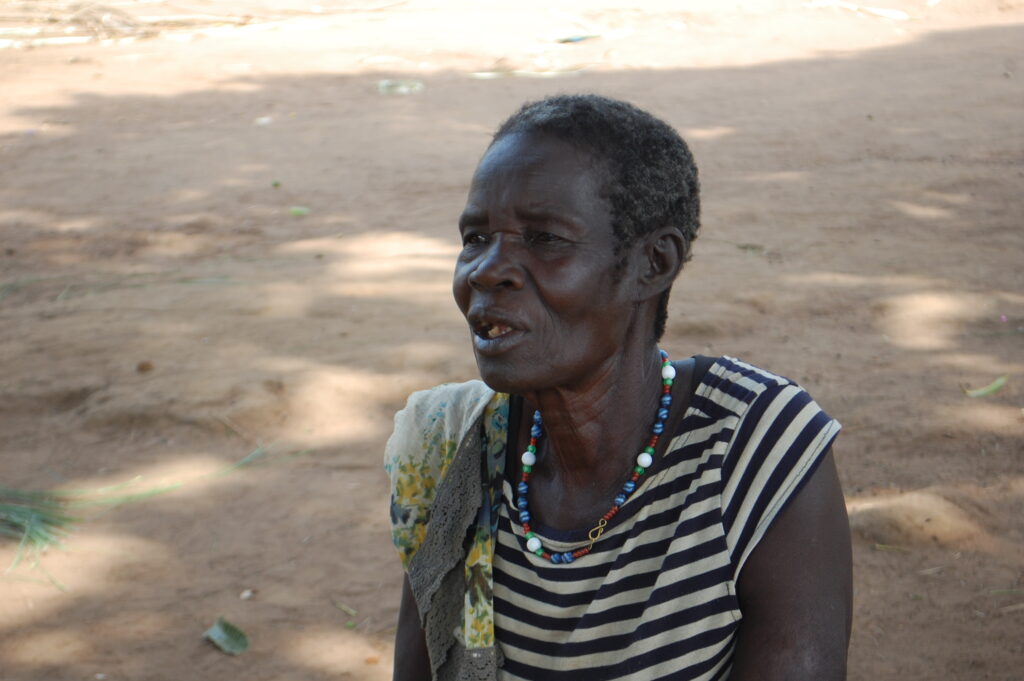 Ajulino Onek, 83, one of the survivors in Lukodi massacre in 2005. She lost seven of her family members

Torina Abalo lost her entire family in one night in 2005. She was preparing to go to bed when she heard unknown people shouting expletives. It was very dark.  The voices turned out to be of LRA rebels. The rebels had surrounded Lukodi Internally Displaced (IDP) camp and were torching huts and shooting randomly.

“I ran briskly into the house and hid for some time. But as the gunshots continued, I heard people crying for help,” she said while pointing at the direction where the rebels emerged from, her left hand swatting a buzzing fly.

“So I got scared and came out running until I hid myself in a pit.”

Abalo spent the night inside the pit. When she climbed out at dawn, grief was everywhere: people wailing, blood splattered allover, and an acrid smell of burnt bodies was hanging in the air. Then she began searching for her family members.

“When I checked into the house, my husband, my children and my co-wife who had a child strapped to her back were burnt to death,” she said sadly. “I was in total shock. I lost everything—including my animals that were looted [by rebels]”

LRA rebels, led by Joseph Kony, waged a war for two decades in northern Uganda and neighbouring countries. The gruesome war led to the deaths of tens of thousands while 1.5 people were displaced in IDP camps. The rebel group relied on the abduction of largely defenceless villages, including children, to provide labour and combatants. Boys were forced to take up arms; girls were forced into sexual slavery.

Recently the International Criminal Court (ICC) found Dominic Ongwen, one of the LRA rebel commanders who had been in custody since 2015, guilty of a total of 61 counts (out of 70 related to crimes and crimes against humanity he committed in Lukodi (Abalo’s village), Odek, Pajule and Abok between 2002 and 2005. (There is still an outstanding warrant of arrest against other LRA rebel leader, Joseph Kony and deputy, Vincent Otti, who are still suspects at large.)

Krispus Ayena Odongo, Ongwen’s lead lawyer has indicated his client plans to appeal against the ruling.

More broadly, Ongwen’s verdict has also elicited mixed reactions across Acholi sub-region. Some local say justice had been served while others expressed that is was unfair on the side of Ongwen, since, like most abductees, was captured at a young age and therefore had to follow orders from LRA rebel commanders.

To Ms Abalo the verdict was ‘satisfactory’ but added, “for justice to be ‘complete, the ICC need to provide reparation.

Indeed, there will be a court-ordered reparation phase dedicated to victims, like Ms Abalo, in the four case locations after Ongwen’s sentence hearing. Since 2008, the ICC, through The Trust Fund for Victims (TFV) has also been helping war victims in northern Uganda, but this was hinged mostly on collective support.

But Transitional Justice experts argue that for this new reparation to work, a thorough and comprehensive registration of the war-affected people needs to be done. After that, individual compensation should follow first before, then collective reparation. Priority areas that urgently need to be addressed, they say, should focus on reintegration, stigma, mental health and economic rehabilitation.

However, Ker Kwaro, an Acholi cultural institution, says this reparation is ‘a form of blackmail’ to war victims, arguing that all affected communities should benefit from it.

“…telling people that they can only benefit from this reparation only if Ongwen is convicted is like asking them to give false information to secure a conviction so that they can be compensated,” says Ambrose Olaa, the Prime Minister for Ker Kwaro Acholi.

But amid this anxiety, another sticky situation lingers. Ongwen’s guilty verdict has triggered a climate of fear among some war victims— especially ex LRA combatants.

Infact, the International crimes Division (ICD), Uganda’s High Court, which has the mandate to prosecute war crimes and crimes against humanity, has been holding court proceedings of Thomas Kwoyelo, an LRA commander captured in 2009 in DRC. Kwoyelo is facing 93 counts of war crimes and crimes against humanity allegedly committed in Amuru and Gulu districts. In 2015, the Supreme Court reversed its decision to grant Kwoyelo amnesty stating that he would stand trial for ‘international crimes’. His case is still stuck at the pretrial stage.

Critics, who say Kwoyelo’s case is a ‘politically motivated’, is a classic example that many ex-LRA commanders, who have benefited from the domestic amnesty may not be safe. Meanwhile, there is a growing consensus among the ex-combatants who fear that ICD could come after them.

“I am even afraid that we might be the next target. Are we safe?” Says Pamela Peace, an ex-child soldier, who was abducted in 1998 Pajule before escaping from rebel captivity in 2002.

Komakech Henry Kilama, a human rights lawyer, who represented the victims in Kwoyelo’s case, in his view, said the DPP has the ‘political and legal power’ to prosecute adding that amnesty given to the ex-combatants ‘cannot be guaranteed’.

Now government appears to have failed to take a clear position and there seems to be a ‘clash between the blanket amnesty’ and the existence of ICD whose role is to try international crimes. Will government move away from the past amnesty approach and give in to the DPP which once stated in the past that it would want to bring more charges on the against former LRA rebels?

Back to Lukodi. Abalo is currently living with her niece who, thankfully, takes care of her due to her ailing health. The pair now rely on farming to survive, sometimes on handouts.

But still this is not enough. Abalo’s dark past continues to stalk her and she can’t wait to get her compensation. On a recent hot afternoon, Ms Abalo, sat on the back porch of her grass-thatched hut after doing her farm work. She was drenched in a sea of thoughts once again. Nearby, her niece was busy shelling groundnuts.

“Things are not okay. I lost everyone and now I am very weak,” she baulked.” I am pleading to the ICC to compensate me for what I lost. Right now, I have nothing.”