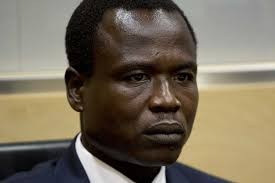 Dominic Ongwen, the ex-LRA Brigade Commander of Sinia Brigade of the Lord’s Resistance Army (LRA) has been sentenced to 25 years in jail by the International Criminal Court (ICC).

Ongwen, one of the most ruthless LRA commanders was convicted on February 4, 2021 of 61 crimes including murder, rape, torture and sexual enslavement.

His trial begun in 2016 after he surrendered to the American forces hunting for the LRA elusive leader Joseph Kony in the jungles of the Central African Republic (CAR).

He is the only LRA Commander who has appeared before The Hague based court after arrest warrants were issued against LRA top commanders in 2005.

Kony allowed Ongwen to rise in ranks and the age of 18, he was already a Major in the LRA.

Ongwen was abducted by the rebel group at the age of 19 while on his way to school.

He highlighted that the Chamber was confronted in the present case with a unique situation.

It is confronted with a perpetrator who wilfully and lucidly brought tremendous suffering upon his victims.

However, it is also confronted with a perpetrator who himself had previously endured extreme suffering himself at the hands of the group of which he later became a prominent member and leader.

The period of his detention between 4 January 2015 and 6 May 2021, will be deducted from the total time of imprisonment imposed on him.

The sentence may be appealed before the ICC Appeals Chamber by either party to the proceedings.