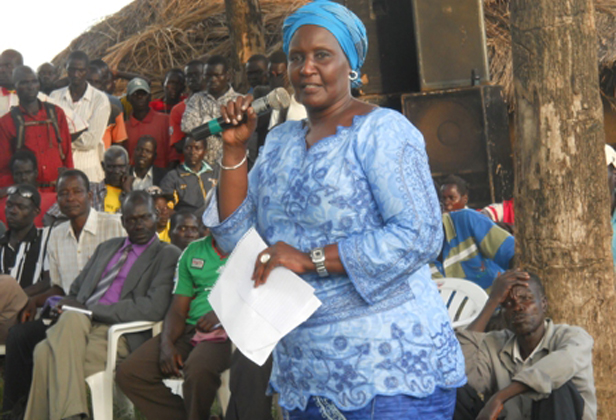 There was drama on Friday last week in Lakang village in Amuru district when three ministers who had gone to launch the Madivani Sugar Production project, were explicitly told by local residents that they were not welcomed and cautioned them never to return their land, as brokers for the Madivani Group of Companies.

The residents who challenged the ministers in a meeting held at Kololo Primary School criticized the three ministers for attempting to sneak into the area to launch the Sugar Production factory project without the knowledge of local residents.

“We want Madhivani to come here and talk to us himself. We do not know you ministers. We shall not listen to you again if you come here since you are not Madhivani”, a resident who didn’t want to be identified told the ministers.

The residents also wondered why the government was always interested in negotiating on behalf of Madhivani.

A girl who identified herself only as Oyella broke down in tears before the ministers and questioned why they were particularly interested in establishing the sugar production on their land.

“I would like to know why our land is only one that is good for sugar production. Is there no other development land in this country? This one is our ancestral land occupied by people, it is not government land,” the girl said.

Gilbert Olanya, the Member of Parliament for Kilak County who arrived on the scene of hearing of the ministers’ presence, told them that Madhivani Group of Companies will never get any land in Amuru, if the 11 suspects arrested last year have not yet been released.

Olanya said that the suspects have been rotting in Gulu Central Prison without being listened to or their case disposed off in a court of law.

The legislator also said that the 11 suspects were arrested on fabricated charges.

“They were arrested because they did not want to give land to Madivani, this is the truth. But this is very wrong. Our land is customary land and we shall fight for it,” Olanya said.

Concy Aciro, the former Woman MP for Amuru said that there had always been acts of intimidation in Lakang, Oforo, Kololo and Banda villages by security agents.

“We are always being intimidated by so called security operatives. This is failing any possibility of negotiations between land owners with the government, since they are acting as agents for Madhivani. If this continues, we shall never negotiate and we shall never leave our land,” Aciro said.

The district RDC, Mr. James Nabinson Kidegain promised to the residents that he will make a follow-up into the case of the local residents who were arrested and make sure that their case is heard in the courts very soon.

Mrs. Betty Bigombe, the State Minister for Water who also doubles as the woman MP for Amuru said that the government was not grabbing any land but was interested in a peaceful negotiation and bringing investment to the region.

Minister Amelia Kyambade, the Minister of Trade, Industry and cooperatives called on local leaders to sensitize communities in the region about investment and wondered why people in the sub region often refuse development in their areas.

The ministers left Amuru disappointed that they were not able to launch the Madhivani Sugar Project.

They had earlier slaughtered three cows in an effort to appease local residents.

UPDATE: Ms Betty Bigombe has resigned from the cabinet and also as member of parliament for Amuru county.

Two Arrested in Lamwo Over Torture of Suspected Cattle Thief