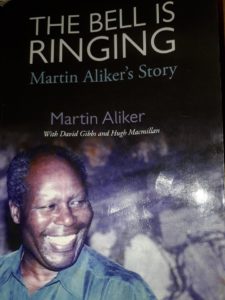 The Bell Is Ringing by Martin Aliker was published by Foundation publishers in 2018. Mr Aliker, a celebrated enterprenuer made 91 last week

Martin Aliker’s autobiography—The Bell Is Ringing—is a deserved self-actualisation chest-thump from a man whose illustrious life cut through major epochs: Uganda under British rule, post-independence turbulence, Uganda under Musevenism and his full embrace of Bretton Woods policies. Under each of these epochs, albeit each with its distinctive features, Aliker prospered.

The Bell Is Ringing is Aliker’s parting shot, a valedictory wave to the world from a man with a feeling of mission accomplished.

‘‘There are no more mountains to climb,’’ he writes ‘‘no points to prove, no conquests to make, we have done it.’’ The ‘‘we’’ being him and his wife, Camille, giving hint to readers of a capitalistic mindset and focus that made him snap shares in companies as way back as the early 1960’s while Uganda was still a sleepy backwater of about only 3 million people living an agrarian life.

The book gets its title from when Aliker first started school in Gulu. He heard the other kids say ‘‘The bell is ringing’’ but had no idea what it meant until he learnt to read and speak English.

Figuratively, the title could be Aliker telling the world: Thank you world. I have done my part. My time is up. The bell is ringing.

Ugandans love to be elites. Many actually are. But many are only elites by consumption, not earnings and production.

Martin Aliker sits at the very top of the real elite class in Uganda. The source of his wealth is not politics but an understanding of the politics of business.

As a whole, Aliker is a product of traditional privilege (son of a chief who went to Budo), a beneficiary of his times, his exceptionalism and a boldness that saw him one morning in 1940’s walk to the home of Prof Ned Munger, a Geography teacher at Makerere College. I want to go to America, the young Aliker told Prof Munger who he found having breakfast.

The trans-Atlantic trip, taken the old way—by ship—literally opened the door to success for the young Aliker so much so that he writes that crossing the Atlantic is a ‘‘family tradition’’– his family’s tradition. From across the Atlantic, he came back with a wife, Camille, whom he married in London on 31st May 1959. He writes so fondly about her, leaving no doubt that the two are one.

The Bell Is Ringing chronicles Aliker’s early life in Acholi, Budo, Makerere College, dental studies at Northwestern University in Chicago, life back in Uganda after studies in America, exile in Kenya, his hobnobbing with revolutionaries, global elites, dogs of war and life under Museveni.

The book is peppered with salacious gossip and jokes gleaned from Aliker’s dinning with power in Uganda, Kenya, Africa and beyond, most notably America and Britain, countries Aliker undoubtedly loves and which greatly influenced his life.

Aliker could have been president of Uganda, if he wanted to—it is the unsaid message that one gets from reading his autobiography. In his heydays, he called and accessed many global leaders. He met President Clinton without an appointment through a Washington power broker.

‘‘Here Martin, have a cigar from me,’’ said Clinton to Aliker (Clinton and Cigars!) during an impromptu meeting at the White House in 1994.

For those grumbling about the stench in Uganda under Museveni, Aliker thinks we’re better off.

‘‘Whatever you feel about Uganda now, we have more freedom than in most countries around the world.’’

But Aliker is not blind to the dark spots in the management of public affairs in Uganda. ‘‘To me, the number one task is the restoration of an effective, efficient and respected civil service,’’ he writes. ‘‘In short the system has collapsed. Everyone wants to see the president. Land dispute, see the president, license to import sandals, see the president…we have reached the point of admiring corrupt officials and thieves’’.

In the end The Bell Is Ringing is a gratification platform for a man who has achieved it all to showcase his exploits in business, power brokering and how he became the ‘‘Chairman of Chairmen’’, a much sought after man by local and multinational companies to head their boards, a man who knew how to navigate the murky political waters of Uganda while making strategic business decisions.

‘‘To members of the future generation, my partying advice is: ‘‘always be true to yourself’’. Is how he ends his book.

Moses Odokonyero is a writer and communications specialist.  This review was first published on his Facebook page in March 2018