“UPDF Will Not Back Off Land in Pabbo and Acholipii,”-Army Spokesman 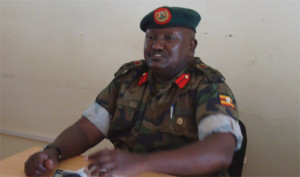 The army spokesman Col Felix Kulayigye last week warned that the Uganda People’s Defence Forces (UPDF) will never back down from laying claim to the land at the centre of a dispute with residents of Kal parish, Pabbo sub county in Amuru district, which he said belongs to the army.

Kulayigye accused the Member of Parliament for Kilak County Hon Gilbert Olanya of misguiding and maddening some youths from the area into removing boundary mark-stones which had been planted under the guidance of Lt. Col. Palson Obwona from the Chieftaincy of Military Production based in Mbuya, Kampala.

Kulayigye made the statement from the Northern Uganda Media Club (NUMEC) during a press briefing last Wednesday.   He added that even the land in Acholpii in Pader district belongs to the army.

“It has now turned out that civilians are the ones who want to grab land from the army but we shall not allow that,” he said.

Kulayigye did not clearly reveal how the army got the lands in question in the first place, but said that all land occupied by refugees is government land under the management of the Prime Minister’s Office, which means that the army can take it if needed it.

The Minister of Lands, Housing and Urban Development in a letter dated the 4th  July requested the Minister of Defense Dr Crispus Kiyonga to immediately investigate the claim that UPDF was barricading land in Pabbo as was reported to Parliament by Hon Olanya.

“I write in reference to the sitting of parliament on the 3rd July 2012, where Hon Gilbert Olanya-MP Kilak county, Amuru district raised a matter of national importance in regards to allegations of land grabbing in Pabbo sub county by the UPFD,” read in part Daudi Migereko’s letter.

Olanya had said that Lt. Col. Obwoya acting under the instructions of Maj. Gen. Joram Mugume went to Kal Parish in Pabbo sub county in Amuru district and without any authority from local leaders and officials; started to survey and fence off over 6000 hectares of land, before ordering over 1000 families who found themselves in the enclosure to vacate the land.

There has been no official response from the Defence Ministry until now, and it is the believe of leaders in Amuru that since Kulayigye is the ministry’s spokesperson, his statement represents the official line of thinking within the army’s leadership.

In other developments, Kulayigye also revealed that the captured former LRA commander Maj. Gen. Caesar Achellam is currently receiving treatment in one of the hospitals in Kampala and the army is prepared to hand him over to the Directorate of Public Prosecution if asked to do so.

He added that Achellam joined the LRA war willingly when he was 26 years of age and may not qualify for Amnesty on grounds that he was among the top senior leadership of the LRA.

He said that Kony has been elusive for a long time because Khartoum has been giving him a safe heaven in her territories.

According to the army spokesperson Kony only visits the jungles of the Central African Republic (CAR) when he runs out of food supplies and whenever he wants to meet some of his combats and top commanders.

He revealed that Kony is only left with about 200 rebels armed with guns who are still active in the DRC and Central African Republic.